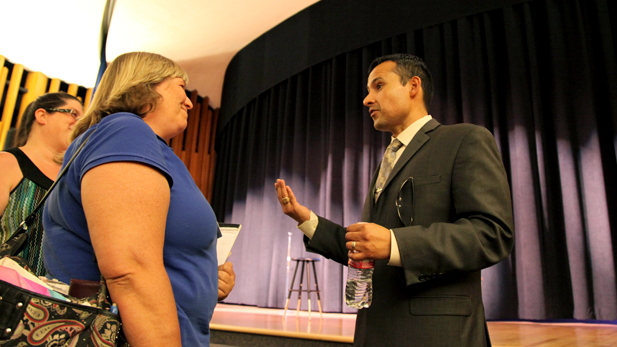 The sole finalist for superintendent of Tucson Unified School District told a public gathering Wednesday the system is "not a troubled district."

When asked about what he would do first, Sanchez said he plans to focus on hearing from all members of the community.

“The first six months have to be about listening,” Sanchez said. “I truly believe that education is the civil right of the 21st century.”

“Whatever charter schools offer, I believe we can offer better.” Sanchez said. “I believe that we do offer a better product in the students that are graduated.”

Sanchez, if given final school board approval, will replace John Pedicone, who announced in March that he would resign at the end of June. Pedicone has been superintendent at TUSD since January 2011.

The search for superintendent began in April using an outside firm. The district said that 67 applications were received and, after an initial screening, the list was narrowed to 21. All were interviewed by the search firm, and 10 were presented to the board for consideration. Four were interviewed on June 8.

Q & A with TUSD's New Superintendent TUSD Hires New Superintendent Texas Educator Named TUSD Superintendent Finalist
By posting comments, you agree to our
AZPM encourages comments, but comments that contain profanity, unrelated information, threats, libel, defamatory statements, obscenities, pornography or that violate the law are not allowed. Comments that promote commercial products or services are not allowed. Comments in violation of this policy will be removed. Continued posting of comments that violate this policy will result in the commenter being banned from the site.