From behind the lens of his camera, Michael McNulty became curious about the rich colors of the desert, so he began to research the properties of light, and how the human eye sees color. 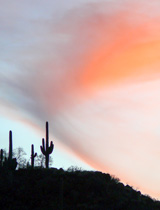 The human eye can see less than one tenth of one percent of such, mostly, invisible spectrum, which includes ultraviolet rays, gamma rays, and x-rays.

To see color within the visible spectrum, most humans have three sorts of light receptors in the retina: a set for red, a set for green, and a set for blue.

These light receptors, called cones, send signals to the brain, which when combined are interpreted as all colors of the spectrum. Three-coned, or trichromatic vision is actually rare for mammals. Typically most mammals, and some so-called colorblind people, lack the cones to perceive red wavelengths.

However, McNulty's research shows that even with three cones, not all colors are seen equally.

"We don’t necessarily think we have trouble looking at red and blue, but if you try to look at different shades of red and blue, you’re going to find that you cannot distinguish them as well as you can green," McNulty said.

McNulty shares his stories of red, green blue in this segment of AZ Illustrated Science. He is working on a book based on his research about the colors of light.

Retinal Implants Get New Tech That Could Improve Clarity Learning Physics by Launching Pumpkins Controversial Treatment Eases Trauma, Raises Questions
By posting comments, you agree to our
AZPM encourages comments, but comments that contain profanity, unrelated information, threats, libel, defamatory statements, obscenities, pornography or that violate the law are not allowed. Comments that promote commercial products or services are not allowed. Comments in violation of this policy will be removed. Continued posting of comments that violate this policy will result in the commenter being banned from the site.