Built in the early 1900s, stadium has housed minor league games, as well as relics of baseball’s bygone past, such as outlaw leagues, barnstorming games. by Zachary Ziegler Tweet
AZPM

Bisbee got its start as a mining boomtown in the late 1800s.

The town is nestled into the sides of a chain of mountains in Cochise County, meaning flat land is at a premium.

So when the Calumet and Arizona Mining Company decided to build a master-planned community in a nearby valley, space for a ballpark was a must.

From the time land was cleared in the early 1900s, the space was used for many events.

“We had English immigrants playing soccer, rugby and cricket on this field every Sunday afternoon in the winter time,” said Mike Anderson, author of "Warren Ballpark," a book depicting the history of the stadium. “It’s been used for Wild West shows, rodeos, boozing and wrestling matches.”

Despite its multiple uses, the ballpark’s main configuration was for baseball.

The stadium housed minor league games, as well as relics of baseball’s bygone past, such as outlaw leagues and barnstorming games.

Those events housed big names from the positive and negative parts of baseball.

“We’ve had such notable figures on this field as John McGraw, the greatest manager of the national league and arguably the greatest manager ever; Connie Mack and Honus Wagner, Lou Bedreaux, Mel Ott,” Anderson said. “Several members of the 1919 Chicago White Sox team played here after being banned from professional baseball for fixing the World Series.”

In 1917, at a time when the U.S. needing copper to build up for World War I, recently unionized miners, who were striking for better conditions, were rounded up, brought to Warren Ballpark, and told to either get back to work or leave town. And, "1,182 of those striking miners chose to leave Bisbee forever,” Anderson said.

Nowadays, Warren Ballpark is owned by Bisbee Unified School District. It was a gift from the mining company to the schools. 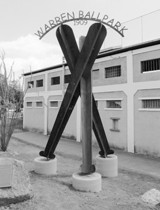 The field is used for Bisbee High School football and baseball games, graduation, as well as local concerts, semi-professional baseball, and an annual vintage baseball tournament.

And the school district is aided by The Friends of Warren Ballpark, a nonprofit group that emerged on the stadium's centennial, and is dedicated to helping ease the burden an aging ballpark can put on a cash-strapped school district.

Improvements include adding on modern bathrooms, repairing seats, and installing signs for both the baseball and football entrances.

The group's next endeavor is to update the space under the ballpark's grandstand, large portions of which date back to the stadium rebuild in the 1930s.

Together, the two act as stewards to the stadium, collaborating on upkeep, making long-needed upgrades, and adding touches to modernize the stadium so the park can be used for years to come.

Historic Bisbee Baseball Field Undergoes Archeological Study Historic Bus to Return to Bisbee for First Time Since '50s Walk, Listen, Learn: A New Way to Tour Historic Bisbee
By posting comments, you agree to our
AZPM encourages comments, but comments that contain profanity, unrelated information, threats, libel, defamatory statements, obscenities, pornography or that violate the law are not allowed. Comments that promote commercial products or services are not allowed. Comments in violation of this policy will be removed. Continued posting of comments that violate this policy will result in the commenter being banned from the site.