AZ Week: Barber at Forefront of A-10 Preservation

There are proposed budget cuts to the Air Force A-10 fighter program; bipartisan group of Congress aims to prevent that from happening. by Maria Inés Taracena Tweet
AZPM

In November of last year, U.S. Rep. Ron Barber, alongside a bipartisan group of 30 other members of the House and Senate, sent a letter to Secretary of Defense Chuck Hagel asking him to stop budget cuts from the A-10 Thunderbolt II jets program.

The letter came after news of the Air Force's plans to retire the jets, even though the agency had just invested in new electronics and wings to extend the life of the plane for at least another 20 years, according to Barber. 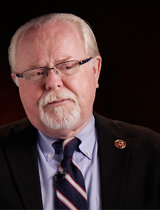 Since then, the congressman has been at the forefront in the battle to keep the A-10 flying, and during Friday's broadcast of Arizona Week, the Arizona Democrat said it makes no sense to ground the aircraft, as it is one of the most powerful components of the country's national security, as well as the economy of Southern Arizona.

Tucson's Davis-Monthan Air Force Base is home to more than 80 of the jets, with much of the A-10 wing work done there. The base is also home to A-10 training missions - with most of it pilots flying A-10s - making the plane a strong job and economic contributor in the area.

"The whole military installation and compliment here is huge," said Barber, who is also a member of the House Armed Forces Commission. "About 50,000 people are either employed directly or indirectly benefit from the military installations...such as Fort Huachuca and Davis-Monthan. The A-10 is crucial to our national defense, but we cannot forget and we must not forget the economic impact, and if we don't save these (A-10 training) missions, we put in jeopardy...$4.5 billion in annual economic input for our Southern Arizona community."

If the A-10 retires, it would be potentially replaced by the new F-35, according to the Air Force. And, while Barber does back up bringing the F-35 to Southern Arizona, he said he doesn't understand why the agency spent about $1 billion to improve the A-10 and now wants to deploy the F-35. Not to mention the F-35 doesn't come close to what the A-10 is capable of doing in battle, he added.

Barber also argued the Air Force is actually ignoring language in the National Defense Authorization Act - a bill passed every year - which says the agency should not plan to retire the A-10, not just for the fiscal year, but the entire calendar year.

"I think a lot of it depends of how the Air Force addresses the changes that Congress made in this sequestration budget cuts," he said. "And we passed a bill three weeks ago to reduce the amount of cuts...and to give all branches of the military more time to know what they can do (with the funds) and plan."

Most importantly, Barber argued, it is about keeping U.S. troops safe, and the A-10 is a great ally for those in ground battles, because it is an aircraft that can fly as low and slow as it needs to, he explained.

"I’ve spoken to members of the Army who have returned from Afghanistan, Iraq…people who are now stationed at Fort Huachuca, and they tell me over and over again stories about being in battle, and if the A-10 was around then they knew it was going to be a better day," Barber said.

Barber said he is pleased to see a bipartisan group come together in guarding the legacy of the A-10, a plane he calls "one amazing piece of technology."

Davis-Monthan Opens Gates for Special Air Show US Sens Say Cutting A-10 is Violation of Law AZ Week: Barber Standing Strong With Vet Affairs
By posting comments, you agree to our
AZPM encourages comments, but comments that contain profanity, unrelated information, threats, libel, defamatory statements, obscenities, pornography or that violate the law are not allowed. Comments that promote commercial products or services are not allowed. Comments in violation of this policy will be removed. Continued posting of comments that violate this policy will result in the commenter being banned from the site.