Essay collection explores his life and different dimensions of his work; fans will be able to find it at Tucson Festival of Books' Science City. by Anna Augustowska Tweet
AZPM

This weekend, in the Tucson Festival of Books' Science City, fans of Ray Bradbury, a famous science fiction writer from Southern California, will find a new essay collection that presents a “kaleidoscopic view” of his life and work.

The book called, "Orbiting Ray Bradbury’s Mars: Biographical, Anthropological, Literary, Scientific and Other Perspectives," is a collaborative project of a diverse group of writers, with several based at the University of Arizona's Lunar and Planetary Lab and at the Kuiper Circle.

For Gloria McMillian, a UA research associate and an editor for the collection, Bradbury’s death in June 2012 was a trigger to write a book, which not so much celebrates his life, but rather finally makes known all the areas Bradbury was involved in. 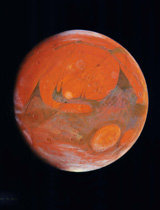 To bring out these connections, NASA scientists and professionals in humanities contributed to the publication.

By inviting people of different backgrounds, we wanted to connect arts and sciences for an author who represented both, McMillian said.

“I was trying to show what Mars was thought to look like at the time that Bradbury was writing his stories,” Hartmann said. “And I painted this picture because I thought what if, when our Mariner 9 spacecraft got to Mars in 1971 and we turned on the camera, this is what we would have seen, these straight line artificial features on Mars.”

This book is about understanding curiosity and not taking limits seriously, said McMillian.

“Someone like Bradbury, who never got to attend college…and… grew up during the Great Depression, believed that you don’t let things stop you and that is one of the big messages in the book, not to take other people’s culture away from them," she said.

Since then, the book, which made its debut back in November 2013, has been available for purchase online, such as on Amazon.com, and the McFarland Publishers website.

The essay collection will be featured at Science City at the Tucson Festival of Books on the UA campus this weekend. Saturday, March 15 McMillan will be signing copies of the collection at the UA Library Special Collections' current exhibition “Mars Madness."

UA Doctorate Student First to Identify Minerals on Mars Surface Minding Mars from Tucson How A.J. Croce connected with his father through the music they loved.
By posting comments, you agree to our
AZPM encourages comments, but comments that contain profanity, unrelated information, threats, libel, defamatory statements, obscenities, pornography or that violate the law are not allowed. Comments that promote commercial products or services are not allowed. Comments in violation of this policy will be removed. Continued posting of comments that violate this policy will result in the commenter being banned from the site.