In the last five years, 96 animals have been born or hatched at Tucson’s Reid Park Zoo, and 175 animals have died.

That’s part of the life cycle, and zoo officials say part of the equation that leads to death is that zoo animals often live longer than their wild counterparts.

When an animal dies, the zoo is required to do a necropsy, the animal version of an autopsy, according to the accreditation standards from the Association of Zoos and Aquariums.

The organization sets the standards for how animals on exhibit should be treated.

The association looks at how animals are treated, including where they are kept and how many are living together. Accreditation requires animals have mental and physical stimulation, 24-hour access to a veterinarian, and specialized management plans.

The association does not grant interviews about individual zoos, but can make general comments about its accreditation program and animal welfare.

Vehrs could not compare Reid Park Zoo's birth or death numbers to other zoos, she said.

“There are no hard-line rules on what is a trend. It’s one of those really hard variables, it depends what are the species in the collection because they all live different life spans," she said.

One of those variables: "Is a collection geriatric or not? In that case we’re going to expect to see more animals die," Vehrs said.

That's why necropsies are an opportunity to learn something new, said Jason Jacobs, the administrator of Reid Park Zoo.

One example is the physical impact of arthritis on an animal, Jacobs said.

“In the wild for instance, they usually don’t get arthritis because they don’t live long enough to develop that, because if they do, if they show any sign of physical weakness, they’re going to get picked off by a predator or sometimes killed by …competition with other animals of their own species,” he said.

So when an animal lives long enough in a zoo to develop arthritis, veterinarians can learn about the effects of the disease on the animal’s body while doing a necropsy, he said.

“You have to remember that the zoo is a living collection, and while we have animals pass away…we also have animals born all the time too,” he said.

The animals are generally part of a national collection that is managed as a whole, Jacobs said. For example, the Reid Park Zoo’s lions were brought to Tucson with the goal that they would breed. They had a litter of four cubs in December, the second litter for the pair.

They are a good example, Jacobs said, of animal management strategies.

“Now their genes are overrepresented in the gene pool so our female lioness is on birth control,” he said.

Because the animals are part of a national conservation strategy, zoos often learn from each other, he said.

“We use the best practices by talking to other zoos and conservation organizations and we apply those to the animals here,” he said. But it’s not done by formula, “each animal is managed to that animal’s individual needs.”

For example, the zoo has two white rhinoceroses. The 13-year-old male spends his days outside, and is social and active, Jacobs said. The 40-plus-year-old female spends much of her time inside during the day, she moves slower, and is not on public display.

The older rhino is an example of animals Jacobs referred to as “retired.” They are animals that are not on display and have far exceeded their natural life.

Another example is a sun bear with cataracts in her eyes, Jacobs said.

She is off-exhibit, but zoo tours often visit her in small groups. She socializes, accepts snacks of peanuts, and has access to indoor and outdoor areas at all times, though Jacobs said she prefers to be inside.

Seeing animals in various stages of their lives is part of the zoo’s education obligation. Education is related to animal conservation, one of the zoo’s goals, Jacobs said.

“If we do a good job of presenting those animals in a meaningful way in natural environments, people are going to learn while they’re here,” he said.

Zoos also can help save species through reintroduction programs for endangered animals, he said.

“I realize that some people are not a fan of zoos,” Jacobs said.

While he respects that’s the case, he said he is passionate about his job because in his 20-year career, he has seen several species saved from extinction, including: American bison, California condor, golden lion tamarin, Arabian oryx, and the black-footed ferret.

“Sometimes it is very difficult to change peoples’ ideas,” he said, but, “we are one of the most visited cultural attractions in Southern Arizona, so we must be doing something right.” 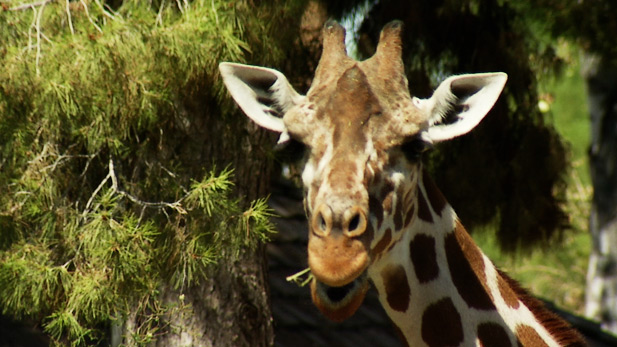 Reid Zoo African Elephant Gives Birth to Female Calf Metro Week: Fire Season Underway, Prep Began Months Ago Metro Week: Pima College Works to End Probation
By posting comments, you agree to our
AZPM encourages comments, but comments that contain profanity, unrelated information, threats, libel, defamatory statements, obscenities, pornography or that violate the law are not allowed. Comments that promote commercial products or services are not allowed. Comments in violation of this policy will be removed. Continued posting of comments that violate this policy will result in the commenter being banned from the site.