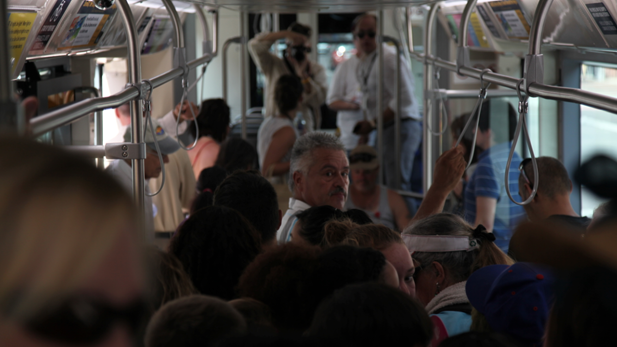 Inside the Tucson streetcar on its inaugural run, July 25, 2014.
Vanessa Barchfield, AZPM

An estimated 60,000 people braved broiling heat this weekend for a chance to ride Tucson’s streetcar for the first time.

The streetcars traversed the four-mile corridor, followed by overflow buses to transport people who no longer wanted to wait to get into the packed streetcars, which were running for free during their first weekend of service.

Volunteers were stationed at each stop to help with boarding, hand out bottles of cold water and make sure passengers used crosswalks after disembarking.

The handrail on one streetcar came loose because so many people were holding onto it, but otherwise there were no service issues, Ginn said.

Ginn described the opening weekend as very successful. She said officials weren’t sure how many people would turn out, especially on Friday during work hours, but that the trains were full throughout the three days.

A conductor on Monday morning's first eastbound run said service was supposed to stop at 8 p.m. Sunday but continued past 10 p.m. because people continued to wait at the stations.

Starting Monday, regular fares will be charged on the streetcar. A one-way trip will be $1.50. Kiosks at the streetcar stations will sell only $4 passes good for 24 hours, and the machines accept only exact change and credit cards. Other passes can be purchased online or at any of the municipal transit system's three centers.

1 Millionth Streetcar Passenger Wins Free Rides Tucson Streetcar Ridership Down in November, December Streetcar's First Paying Day: 3,500 Passengers, Few Problems
By posting comments, you agree to our
AZPM encourages comments, but comments that contain profanity, unrelated information, threats, libel, defamatory statements, obscenities, pornography or that violate the law are not allowed. Comments that promote commercial products or services are not allowed. Comments in violation of this policy will be removed. Continued posting of comments that violate this policy will result in the commenter being banned from the site.