5,000 passengers on average day, compared with projections of 3,600; wide range of users from students to families. Tweet 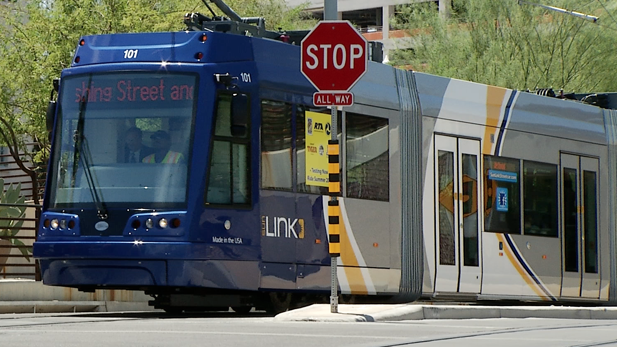 Less than two months into its operation, the Tucson Modern Streetcar is exceeding expectations among both city officials and local businesses.

Streetcar Project Manager Shellie Ginn said that, although the initial number of riders fell in line with expectations of 3,600 passengers per day, ridership has nearly doubled since classes began at the University of Arizona.

By the first week of September, the streetcar was averaging roughly 5,000 per day, and continues to have a high volume of riders.

“Well, what really is exciting to me is that it’s not just one type of rider…It’s exciting to see every generation’s out there – families, young people...university students, working class, people who are attending events, social events, cultural events, athletic events," she said.

Paula Wilk, a retired Tucson resident who lives in Armory Park, said she uses the streetcar to travel downtown. While waiting at a stop on Congress Street, she explained its benefits.

“One thing I think it may do in the long-run, particularly if it's expanded, is help people think more about mass transportation, and finding ways to live and get around that, let them walk and meet each other, and use the smaller stores that are all around and the restaurants," she said. "So, I think it’s likely to build a good sense of community, as well as just being a good means of transportation.”

Kim Bower, general manager of the restaurant Proper, located on Congress Avenue, said business has significantly increased compared to this time last year – something she said she attributes to the streetcar.

Some streetcar riders say that, although the streetcar is convenient, the price could be a deterrent.

Though the cost of the streetcar is $1.50 each way, kiosks located at the stops only sell day passes for $4 each. Riders can purchase what is called a SunGO card, which are re-loadable passes that are charged $1.50 per ride, at Ronstadt Transit Center downtown or online.

Ginn said officials have received complaints regarding passes, and are utilizing customer service to educate the public about how to purchase re-loadable passes. She said there have been enough complaints from the public to begin investigation on the cost of adding full-service vending machines that sell different passes in each part of the route, but they are very expensive.

Sun Link Streetcar Anticipates Millionth Passenger Soon Tucson Streetcar Voices Streetcar's First Paying Day: 3,500 Passengers, Few Problems
By posting comments, you agree to our
AZPM encourages comments, but comments that contain profanity, unrelated information, threats, libel, defamatory statements, obscenities, pornography or that violate the law are not allowed. Comments that promote commercial products or services are not allowed. Comments in violation of this policy will be removed. Continued posting of comments that violate this policy will result in the commenter being banned from the site.