McCain, Flake visit Tucson base, pledge to work for preservation of A-10, military-related jobs in region. by Tony Paniagua Tweet 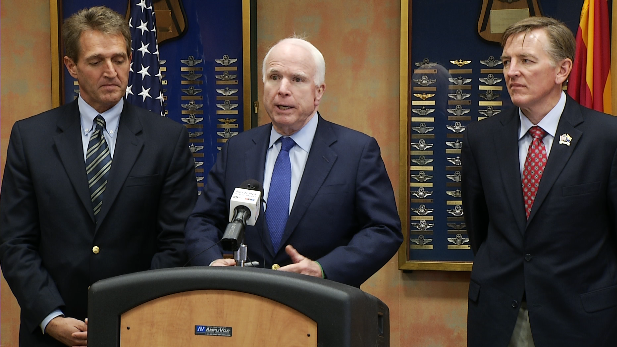 Arizona's U.S. senators pledged Thursday to protect Tucson's Davis-Monthan Air Force Base and the A-10 airplane based there.

On a visit to the base, Republican Sens. John McCain and Jeff Flake, along with Republican U.S. Rep. Paul Gosar, called the plane essential to the U.S. military.

McCain is expected to be chair of the Senate Armed Services Committee next year and said he will hold hearings about the future of the A-10, which the Air Force has marked for retirement.

"The problem is that the Air Force was talking about retiring it and saying they would replace it with the B-1 Bomber, which by the way the cost per operating hour would be at least 20 times what the A-10 is, and then they were talking about the F-35," he said.

"The A-10 costs $15 million, the F-35 costs over $100 million, so none of it that the Air Force was saying would make sense," McCain said. "And we still have to have a viable, strong air-to-ground mission capability, and I think the conditions, the situation in Iraq clearly indicates that."

McCain said changing budgeting procedures will be atop the agenda when the new Congress assembles.

"You have to set priorities, and the first thing we have to do is repeal sequestration so we can relieve these pressures on the draconian cuts that have been inflicted on defense as the world has grown more dangerous," he said.

The sequestration cuts were across-the-board spending reductions that Congress put in place as a way of getting it to pass more realistic budgets.

The Republican delegation also visited other military installations in the state, including Fort Huachuca.

A-10s Will Fly for Another Year Davis-Monthan A-10s safe Lifeguard shortage leaves some Tucson pools closed
By posting comments, you agree to our
AZPM encourages comments, but comments that contain profanity, unrelated information, threats, libel, defamatory statements, obscenities, pornography or that violate the law are not allowed. Comments that promote commercial products or services are not allowed. Comments in violation of this policy will be removed. Continued posting of comments that violate this policy will result in the commenter being banned from the site.