Tucson area will experience slow employment growth in next 2 years, but still lag rest of Arizona. by Zachary Ziegler Tweet 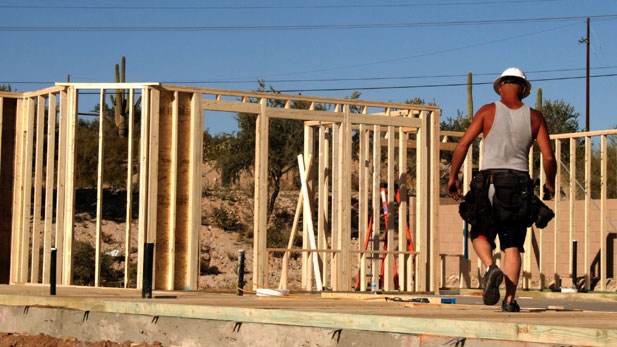 Construction employment is down by nearly half in the Tucson area in the last decade.

Health care will lead Tucson area job growth this year and next, while the once-robust construction industry will remain stagnant, the latest state employment forecast shows.

The report from the state Office of Employment and Population Statistics predicts 1.6% growth for Tucson in 2015 and 1.8% in 2016. While the numbers are still a little low, the report's main author said she is optimistic.

“I would say it’s been flat, but we are slowly picking up,” state economist Aruna Murthy said.

At the top of the report is the health services sector, predicted to add 3,100 jobs before 2017, and at one hospital, the scramble will be on to fill many of those positions.

“Our focus lately has been on the specialty (registered nurses)," said Tucson Medical Center's Jon Oravec. "Nationally we really are looking at a shortage of those nurses with those operating room skills, or intensive care. Those really specialty area skills.”

Positions such as RNs require licensing and often a bachelor's degree.

Lower level positions are also a challenge to keep staffed, such as those who focus on basic care for hospital patients.

"We’ve been able to get the patient care techs in here," Oravec said. "We have very good relationships with local community colleges, so we have a good pipeline.”

He added that TMC has managed to keep its staff members by keeping its wages and benefits competitive, keeping facilities current, and stressing the importance of the hospital in the community to its staff.

On the other end of the report is construction.

But then the housing bubble hit, and construction has yet to rebound.

“The construction industry, basically, in the great recession era, we lost about half of all the construction jobs and we have not recovered since,” said Arizona Builders Alliance Executive Director Mark Minter. “What’s impacted are the basic trades, the heavy equipment operator or the guys placing and pouring concrete, things like that.”

Minter said he is hopeful. That's because construction often lags behind the times when it comes to shifting financial realities.

“We’re a trailing indicator of the economy," he said. "When things are going well and start to slow down, we slow down later, and when things start to get better, we get better later.”

Buy a House, Sell It Quickly: Flipping Rises Anew in Tucson Another Big Student Housing Structure Coming Near UA Arizona Job Growth Lagging in Key Sectors, Including Retail
By posting comments, you agree to our
AZPM encourages comments, but comments that contain profanity, unrelated information, threats, libel, defamatory statements, obscenities, pornography or that violate the law are not allowed. Comments that promote commercial products or services are not allowed. Comments in violation of this policy will be removed. Continued posting of comments that violate this policy will result in the commenter being banned from the site.