State of City: Opportunities for Growth in Tucson 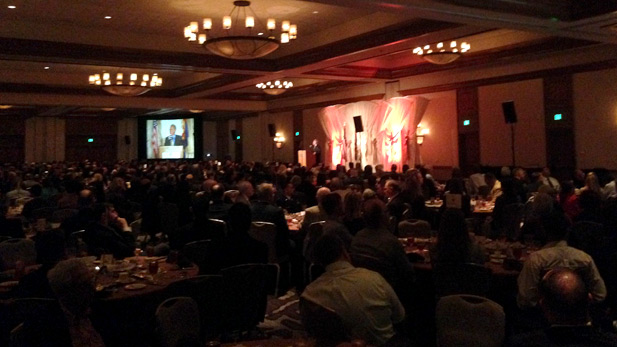 Mayor Jonathan Rothschild gave his fourth state of the city speech Friday at the JW Marriott Starr Pass Resort. The annual address is Rothschild’s opportunity to outline priorities for the coming year.

Rothschild, whose term ends this year, said he plans to run for re-election in the fall.

The theme for this year’s speech was opportunity – economic, social and civic. Read the full speech here.

Here are a few areas Rothschild emphasized in his prepared text as priorities for the coming year:

Rothschild’s call for annexation has been a staple of his state of the city speeches and this year is no exception. Rothschild said Tucson is losing tens of millions of dollars in revenue by not incorporating more of Pima County. He estimated last year’s annexations, which included Ghost River Ranch and land east of South Kolb Road and along East Valencia Road, will bring in close to $40 million in the next 10 years.

Rothschild applauded the contributions of Southern Arizona’s military installations. He said Tucson’s location, mild climate and connection to the University of Arizona make it a prime spot for defense operations. The Air Force recently announced that 10 percent of the base’s A-10 airplanes were going on back-up status.

Rothschild recalled his experience knocking on the doors of dropped-out high school students in the Tucson Unified School District. He urged adults to set a positive example for teens and to reach out to state lawmakers and demand more funding for education.

The city of Tucson opened trade offices in the Mexican cities of Hermosillo, Ciudad Obregón and Mexico City last year. Rothschild said the next step is to streamline transportation between the countries. One option is improving the connection between Interstate 19 and the Mariposa Port of Entry.

The city completed its first year of street-bond funded road repairs under budget, Rothschild reported. By the end of the project, an additional 650 lane miles will be paved, and Rothschild wants to see the program renewed for another five years.

Rothschild said he hopes the same tactics used to reduce metal thefts to below 2010 levels can be applied to reducing graffiti. The Tucson Police Department collaborated with metal recyclers and a Pima County task force to save more than $2.5 million in stolen metal.

In the past, economic development, fixing the roads and improving business relationships with Mexico have been top priorities.

For more on the State of the City, tune into Metro Week with host Andrea Kelly Friday at 8:30 on PBS 6. Kelly and the Journalists Roundtable will dissect the mayor’s speech and take a look at the week’s top issues.

State of City Speech Friday: Progress Report for Tucson Tucson Mayor's Third State of City Address Wednesday Pima County tourism saw strong rebound in 2021
By posting comments, you agree to our
AZPM encourages comments, but comments that contain profanity, unrelated information, threats, libel, defamatory statements, obscenities, pornography or that violate the law are not allowed. Comments that promote commercial products or services are not allowed. Comments in violation of this policy will be removed. Continued posting of comments that violate this policy will result in the commenter being banned from the site.