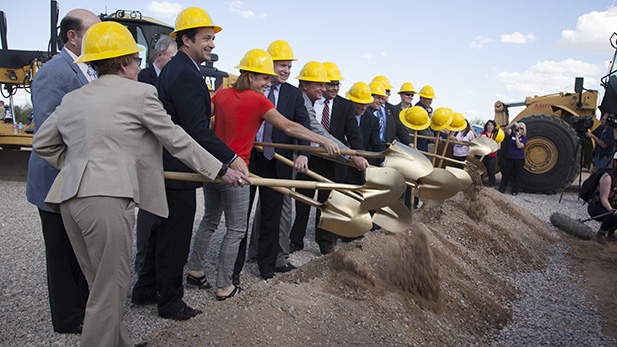 Elected officials from Tucson, Pima County and Arizona's congressional delegation scoop dirt in a ceremonial groundbreaking for the project to move Hughes Access Road a half-mile south of its location. The new road will be called Aerospace Parkway.
Andrea Kelly, AZPM

A host of government and business leaders broke ground Tuesday for a road project on Tucson's South Side, declaring that it is a big step toward economic opportunity for the area.

Aerospace Parkway will run five miles from Nogales Highway on the West to Alvernon Way on the east and give Raytheon Missile Systems a bigger buffer than it now has from urban development.

County leaders called the new road the first step in a multi-phase project that they think will help develop the local economy.

The $12.7 million project will allow Raytheon to relocate one building on its property and leave space for future expansion. It also will allow for other high-tech companies, including Raytheon suppliers, to locate along Aerospace Parkway. 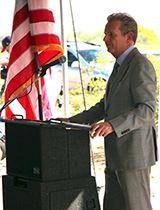 “The opening of an aerospace corridor that will connect I-10 and I-19 is significant not just for Raytheon, but for the enterprises we hope will come and establish themselves here,” said Raytheon President Taylor Lawrence.

McCain was among a large group of politicians and business leaders participating in the groundbreaking ceremony.

The Aerospace Parkway project will be paid for with funds from the Regional Transportation Authority. Funding for the next phase, a two-lane road connecting Aerospace Parkway and Interstate 10 at Rita Road, is proposed as part of the next county bond election.

Pima County Breaking Ground on Aerospace Parkway Bankruptcies in AZ dropped in 2022 Pima County tourism saw strong rebound in 2021
By posting comments, you agree to our
AZPM encourages comments, but comments that contain profanity, unrelated information, threats, libel, defamatory statements, obscenities, pornography or that violate the law are not allowed. Comments that promote commercial products or services are not allowed. Comments in violation of this policy will be removed. Continued posting of comments that violate this policy will result in the commenter being banned from the site.