Ducey: State 'Only One of Many Investors' in Universities

Strategy should address needs of students and business community that depends on their success, he says. by Vanessa Barchfield Tweet 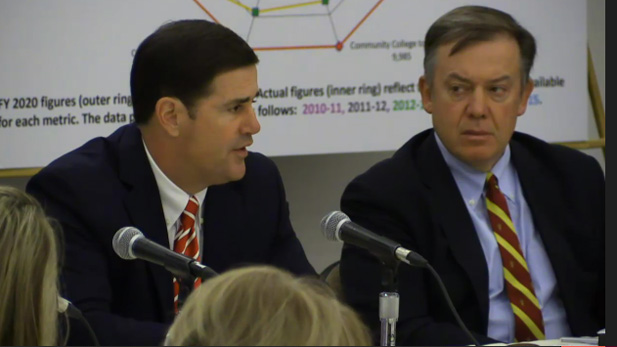 Arizona Governor Doug Ducey asked the Board of Regents today to develop a long-term, sustainable business plan for how the universities operate.

The meeting took place weeks after he signed a budget that cuts $100 million from the state’s three public universities.

Ducey stressed the interdependence of education and economic development, and called on the Regents to seek input from the business community.

He also said the business plan should count on the state as only one of many investors.

"State support is not and cannot be the only financial driver for the future of our university system," he said.

Regents and university presidents said they welcomed the opportunity to develop a funding model that eliminates the year-to-year scramble for state money, but the sting of this year’s cuts remains.

"My biggest frustration as a conservative is the lack of appreciation by my fellow conservatives in the legislature for what these institutions are and what they do," he said.

The universities will release their tuition proposals tomorrow, which are expected to partially compensate for the drop in state funding.

Ducey: State Must Stop Spending Money We Don't Have Arizona Public University Tuition Hearing Tonight UA President Hart: Budget Cuts Disappoint But Don't Surprise
By posting comments, you agree to our
AZPM encourages comments, but comments that contain profanity, unrelated information, threats, libel, defamatory statements, obscenities, pornography or that violate the law are not allowed. Comments that promote commercial products or services are not allowed. Comments in violation of this policy will be removed. Continued posting of comments that violate this policy will result in the commenter being banned from the site.