300 expected to take part in one of the most challenging in the region. by Vanessa Barchfield Tweet 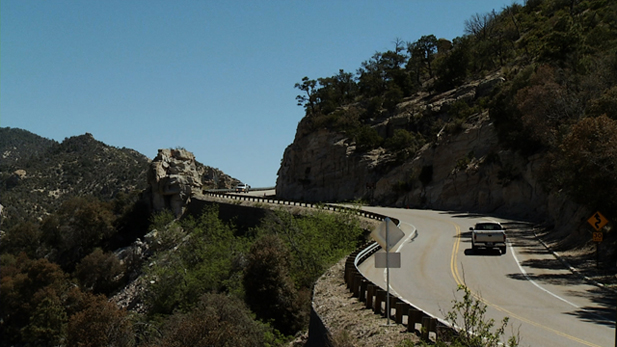 Visitors travel up and down Mt. Lemmon highway which leads to the top of this popular "sky island", one of many in Southern Arizona.
AZPM
Listen:

About 300 cyclists are expected to take part in the Mount Lemmon Hill Climb on Friday.

The ride will take them up a 6,600-foot climb in elevation in the first half of the 56-mile course.

But it's not just for pros.

"We encourage intermediate cyclists, who might be a little intimidated by having to take up all the water they need and all the food they need, to try our ride," said Patrick Rinckey, one of the organizers. "Because we have support, we have sweep vehicles running the course in case your bike breaks down or you get nervous on the way down the hill, and you want a lift back down. And we have food and water every eight miles."

If the physical reward of making it to the top is not enough, Rinckey said there’s something else that may help cyclists pump a just a little bit harder.

This year there will be about 50 pies waiting to feed hungry cyclists and fuel them for the ride back down.

After the sugar rush, Rinckey warned participants to use brakes during the descent.

Go over the 35-mile speed limit and you may get a ticket – even on a bike.

Mt. Lemmon Smartphone Driving Tour Developed at UA Tucson Boosts Bicycle, Pedestrian Friendly Infrastructure Arizona and Duke agree to basketball series for 2023 and 2024
By posting comments, you agree to our
AZPM encourages comments, but comments that contain profanity, unrelated information, threats, libel, defamatory statements, obscenities, pornography or that violate the law are not allowed. Comments that promote commercial products or services are not allowed. Comments in violation of this policy will be removed. Continued posting of comments that violate this policy will result in the commenter being banned from the site.