May employment usually slows with school out; this year's slows more than decade-long trend. Tweet 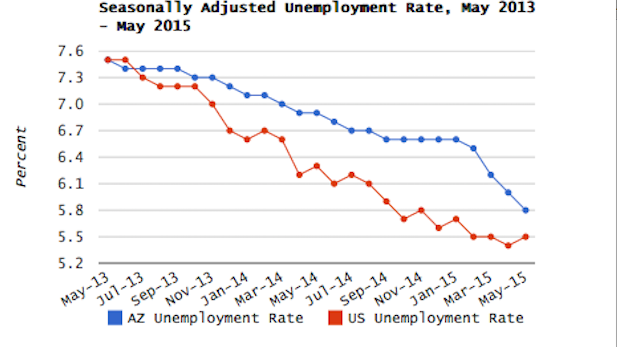 Unemployment fell to 5.8 percent in Arizona last month, down from 6.0 percent in April, the state's employment statistics agency reported Thursday.

The nationwide unemployment rate in May was 5.5 percent.

The state lost 10,500 non-farm jobs, in a seasonal norm with school letting out. The private sector added 1,700 jobs to offset a loss of 12,200 in government and schools.

"This was more than both the post-recessionary average of 2,500 jobs and the 10-year average loss of 1,900 jobs," the report from the Office of Employment and Population Statistics said.

Six of the 11 major employment sectors lost jobs, with government, including education, down 12,200 positions and leisure and hospitality, mostly tourism, down 2,500.

Tucson Job, Home Markets Growing at Similar Rates METRO WEEK: Tucson Job Center Gets National Attention Arizona Job Growth Lagging in Key Sectors, Including Retail
By posting comments, you agree to our
AZPM encourages comments, but comments that contain profanity, unrelated information, threats, libel, defamatory statements, obscenities, pornography or that violate the law are not allowed. Comments that promote commercial products or services are not allowed. Comments in violation of this policy will be removed. Continued posting of comments that violate this policy will result in the commenter being banned from the site.