Live Music on Streetcar? Yes, in Tucson This Summer 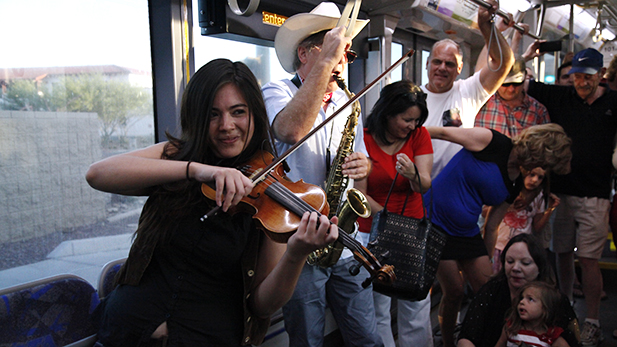 Samantha Bounkeua, violinist with Jimmy Carr and The Awkward Moments said playing on the streetcar was "exhilarating." "“Musicians always play spontaneously so often so it’s nice to play in different places because it keeps it so fresh," she said.
Mariana Dale, AZPM

Accordion player and singer Jimmy Carr says he’s been kicked out of subways for playing music.

Saturday night was the first time he was invited on to public transportation to play.

His band, Jimmy Carr and The Awkward Moments, was the first to play for a series of concerts inside the Tucson streetcar. Radio station KXCI invited six bands to play in the Sun Link Summer in the City Concert Series.

“I’m loving it. This is fantastic,” passenger Colby Henley said. “It’s good to see a packed streetcar and everybody having fun.”

Henley is a regular streetcar rider and made a special trip to see the live music. 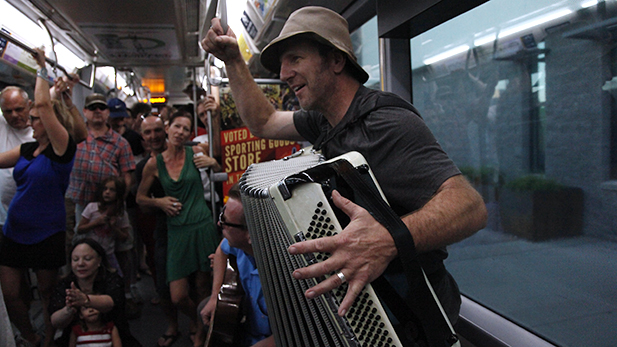 Jimmy Carr said he's played on farms and trucks, but never in public transportation. “It is a bit of a challenge for the musicians, the jerking motion can throw you off, but once you get used to it, it’s great, it’s like a boat,” Carr said.
Mariana Dale, AZPM

Others were surprised when the streetcar doors opened and the chorus of accordion, guitar, saxophone and violin music came spilling out.

"We didn’t realize we had a party trolley," said Green Valley resident Diane Mongeon, who was riding the streetcar for the first time.

Mongeon and friends had dinner at Caruso’s on 4th Avenue and decided to ride the full route before returning to their cars.

Jimmy Carr and The Awkward Moments describes its music as "Euro-Americana" on its Facebook page.

The band played a medley of songs, many featuring solos from the four musicians and several, references to gin.

Band members took requests from the audience, and several people called out for train songs. The group obliged with a rendition of Johnny Cash’s Folsom Prison Blues.

Violinist Samantha Bounkeua said playing on the streetcar was "exhilarating."

"Musicians always play spontaneously so often," Bounkeua said. "It’s nice to play in different places because it keeps it so fresh." 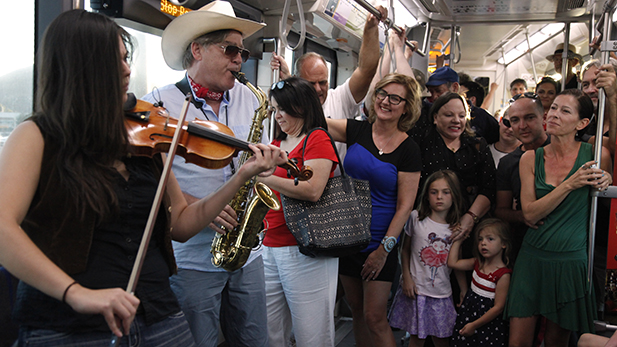 Jimmy Carr and The Awkward Moments was the first band to play in the KXCI Presents: Sun Link Summer in the City Concert Series on Saturday, June 20, 2015.
Mariana Dale, AZPM

Freeloading Riders Reported to Be Rare on Tucson Streetcar José Luis Gomez Named Tucson Symphony's Music Director Piano Bar Brings Business, Song to Downtown Tucson
By posting comments, you agree to our
AZPM encourages comments, but comments that contain profanity, unrelated information, threats, libel, defamatory statements, obscenities, pornography or that violate the law are not allowed. Comments that promote commercial products or services are not allowed. Comments in violation of this policy will be removed. Continued posting of comments that violate this policy will result in the commenter being banned from the site.