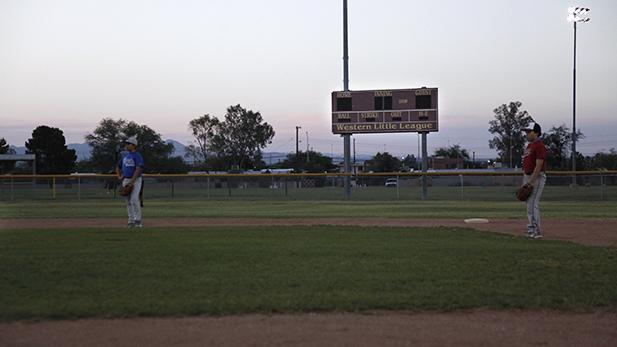 The Western Little League Majors All Star team practices at Joaquin Murrieta Park on June 19, 2015. The team will have its first state tournament game on Thursday, July 16 in Claypool, Ariz.
Mariana Dale, AZPM

The competition is heating up for the state’s little league baseball and softball teams.

On Monday, Pima County will host Western Regional Tournament for junior league softball players. Up to 12 teams from places including Hawaii to Montana will play for the chance to go to the World Series.

“Really you can feel not only the excitement of the girls who come in and travel that are competing for opportunity to go to world series up in Kirkland, Wash., but also the excitement of the fans the folks who get to watch these games at a very high level,” said Carl Thompson, the administrator for district 5 Little League, who hosts the tournament.

Tucson’s Little League teams are broken into two districts with various age leagues for baseball and softball. The leagues compete with teams made up of the league’s best players, the all stars. The overall winner in each district advances to the state and then regional tournament.

For example, the state tournament for Little League Majors baseball starts in Claypool, Ariz. this week.

“It’s a lot of fun to watch the kids succeed and develop, especially the ones that have been together for a few years,” said District 12 Administrator Earl Causbie.

Baseball Fields Give Community Place to Remember Youth West Side Baseball Family Fights to Improve Park Preseason Baseball Returning to Tucson, from Mexico
By posting comments, you agree to our
AZPM encourages comments, but comments that contain profanity, unrelated information, threats, libel, defamatory statements, obscenities, pornography or that violate the law are not allowed. Comments that promote commercial products or services are not allowed. Comments in violation of this policy will be removed. Continued posting of comments that violate this policy will result in the commenter being banned from the site.