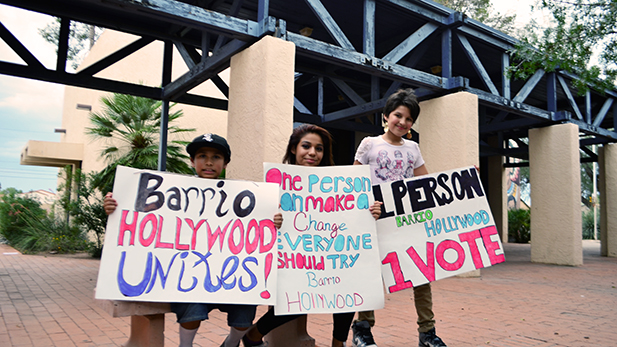 Protesters in favor of residential voting rights within the Barrio Hollywood Neighborhood Association.
Maria Inés Taracena for the Tucson Weekly. Used with permission.

For more than a year, the relationship between Barrio Hollywood residents and neighborhood business owners has been mired in conflict.

The situation reached a peak last week during a meeting of the Barrio Hollywood Neighborhood Association (BHNA), when residents overwhelmingly agreed to no longer allow business or property owners to vote in future elections.

The change to voting bylaws in the BHNA is the result of a growing distrust in businesses and in the Tucson City Council by some barrio residents.

Barrio Hollywood lies close to downtown Tucson on the western side of the Santa Cruz River. It's a densely populated neighborhood that residents say is rooted in the concept of familia.

Hopkins is a longtime resident and activist in Barrio Hollywood. He said he's afraid that generational families like his could become rare if the neighborhood becomes the next in Tucson to be developed, or in his words, gentrified.

The fear of gentrification has contributed to increasing conflict during meetings of the Barrio Hollywood Neighborhood Association. The proposal to take away voting rights from business owners in the barrio caused heated arguments between members.

Diane Hernandez, one of the owners of Pat's, spoke out publicly during Thursday's meeting at the El Rio Community Center.

"The majority of.. in fact all of the businesses...we are for the barrio," Hernandez said.

Egan said neighborhood businesses and the city of Tucson of manipulated the election in response to Barrio Hollywood's role in ending a proposal to sell the historic El Rio Golf Course to a for-profit religious university.

Egan said an unusual amount of people showed up to vote on the night of the BHNA election, many of whom he and other residents didn't recognize.

“All these people showed up at our election who had never shown up before," Egan said. "We accepted it and didn’t challenge it because no one had ever done that before. In 25 years, no one had come to our election...and stuffed the ballot.”

Tucson City Councilwoman Regina Romero's Ward 1 includes Barrio Hollywood. In a written statement, Romero's office said the councilwoman and her staff are not the main point of contact between the BHNA and city government.

'Throughout this process, the Office of Integrated Planning has been the main point of contact with the City. CM Romero has been very clear from the beginning that her staff is to maintain neutrality while the neighborhood resolves this issue. She looks forward to a time when Barrio Hollywood can re-engage in neighborhood improvement discussions.'

Egan is not the only Barrio Hollywood resident who believes fraudulent votes were cast in the election.

Local blogger David Morales agreed. Morales founded Three Sonorans, a Tucson news blog with what he describes as a Chicano activism perspective. Morales said this dispute is part of a larger fight over who will decide the future of Barrio Hollywood. He said the barrio is at risk of becoming the next Hispanic neighborhood in the city to be gentrified.

“The idea is that businesses are really trying [to push toward] this massive move toward gentrification. Right here [to the west] is Menlo Park, and right next to Menlo Park is San Agustin [Mercado]. You can ride a bike to downtown in five minutes from here so it's really prime real estate," Morales said. "There’s been pressure for businesses to supersede the will of the people here."

“The perception of what this neighborhood is, that I think is going to really hurt us and prevent some good things from happening," Carleton said. "I don’t think [government or business] entities are going to want to deal with us."

She said that after Thursday's meeting, she expects to be impeached by Barrio Hollywood residents in the near future.

Barrio resident Hopkins said a new leader for the BHNA could be the first step to rebuilding trust between residents and businesses.

“This is just the beginning. I’m hopeful that we’ll get a new president and younger people are coming to these meetings now, so this is something that we need in our barrio," he said.

Barrio Hollywood Housing Aims to Aid Low-Income Renters Barrio Hollywood Businesses: Gentrification Does Not Benefit Us Historic Carrillo House Celebrates Reopening
By posting comments, you agree to our
AZPM encourages comments, but comments that contain profanity, unrelated information, threats, libel, defamatory statements, obscenities, pornography or that violate the law are not allowed. Comments that promote commercial products or services are not allowed. Comments in violation of this policy will be removed. Continued posting of comments that violate this policy will result in the commenter being banned from the site.