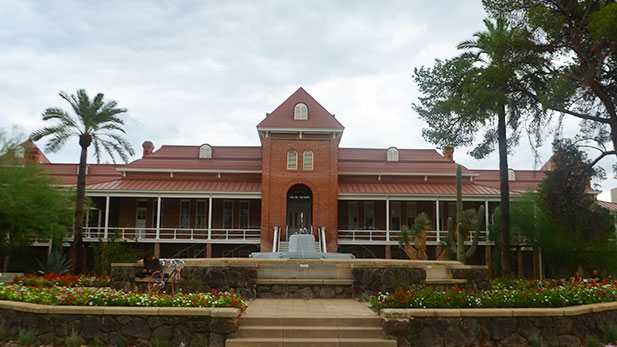 University of Arizona officials are asking students to download a new campus-wide safety app called LiveSafe onto their smart phones.

The app connects users directly with campus police in a more discrete way than ever before, said UAPD Chief Brian Seastone.

"If somebody’s walking along and they see a disturbance but they don’t want to be on the phone and...sound like they’re calling the police, they can click on [the app]...take a picture...and send it directly to the police department."

Seastone said that will help police get better, faster information.

The app also makes it easy for users to request a safe ride or get virtually walked home by sharing their GPS location with a friend.

Seastone said about 40 other campuses around the country are using the LiveSafe app.

Wildcat Fever: Police Want Revelry, Not Rowdiness UA Student Survey: 1 in 5 Women Sexual Misdeed Victims UA Police Department Wants Public Input on Its Policies, Practices
By posting comments, you agree to our
AZPM encourages comments, but comments that contain profanity, unrelated information, threats, libel, defamatory statements, obscenities, pornography or that violate the law are not allowed. Comments that promote commercial products or services are not allowed. Comments in violation of this policy will be removed. Continued posting of comments that violate this policy will result in the commenter being banned from the site.