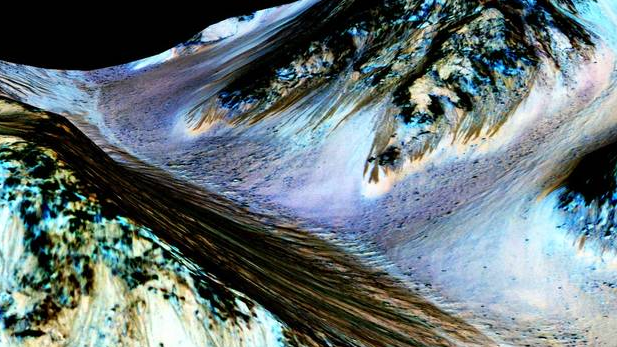 Dark streaks are evidence of water flowing on surface of Mars, UA and other scientists say.
NASA/JPL/University of Arizona

The "strongest evidence yet" that Mars has water was revealed Monday by NASA and other scientists, including a former University of Arizona researcher.

“Our quest on Mars has been to ‘follow the water,’ in our search for life in the universe, and now we have convincing science that validates what we’ve long suspected,” NASA astronaut John Grunsfeld was quoted in a press release as saying. Grunsfeld is administrator of NASA’s Science Mission Directorate in Washington.

“This is a significant development, as it appears to confirm that water -- albeit briny -- is flowing today on the surface of Mars.”

The evidence comes from analysis of images taken by the Mars Reconnaissance Orbiter, the press release said, adding that the analysis started with a former UA undergraduate, Lujendra Ojha, in 2010. Ojha is now with the Georgia Institute of Technology in Atlanta and authored a report on the findings published Monday in Nature Geoscience.

“The fact these salts are hydrated when we observed them means that there’s evidence of molecular water in their crystal structure," Ojha said at Monday's news conference.

Images of slopes on the Martian surface have what scientists have called mysterious streaks that Ojha and others said Monday are evidence of water flowing.

Scientists combined images from the UA-operated HiRise, which is aboard the Mars orbiter.

HiRISE Camera Reveals Ice Buried in Mars Cliffs 'Rise of the Rocket Girls' Chronicles Contribution of NASA Women Flowing Water On Mars Opens Door For New Exploration
By posting comments, you agree to our
AZPM encourages comments, but comments that contain profanity, unrelated information, threats, libel, defamatory statements, obscenities, pornography or that violate the law are not allowed. Comments that promote commercial products or services are not allowed. Comments in violation of this policy will be removed. Continued posting of comments that violate this policy will result in the commenter being banned from the site.