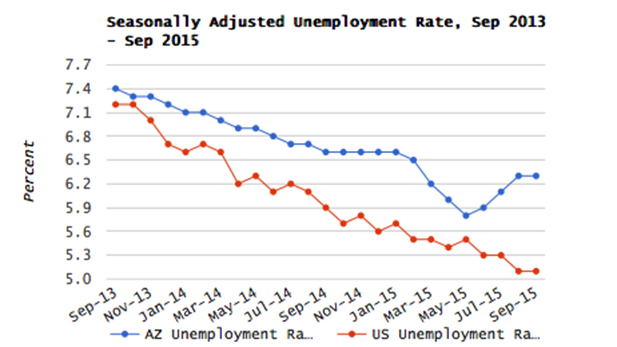 Arizona's unemployment rate stayed at 6.3 percent in September, the fourth month in a row it has not gone down, the state Office of Employment and Population Statistics reported Thursday.

Unemployment in the state had declined steadily for the last two years, hitting 5.8 percent in May. But then, it turned upward despite continued strong growth in the private sector.

In September, however, that changed, with a sluggish 500 private-sector jobs added.

“Almost all the activity was in government, and basically small to no changes in all the other sectors,” said Paul Shannon, the state's labor market director.

The largest gains in the private sector were in tourism, which added 3,100 jobs. Manufacturing lost 1,700 jobs.

Arizona Jobless Rate 5.2%, Lowest in More Than 8 Years Arizona Unemployment Up For Third Consecutive Month Tucson Job, Home Markets Growing at Similar Rates
By posting comments, you agree to our
AZPM encourages comments, but comments that contain profanity, unrelated information, threats, libel, defamatory statements, obscenities, pornography or that violate the law are not allowed. Comments that promote commercial products or services are not allowed. Comments in violation of this policy will be removed. Continued posting of comments that violate this policy will result in the commenter being banned from the site.