State numbers have shown recent anomalies, but appear to have returned to normal by Zachary Ziegler Tweet 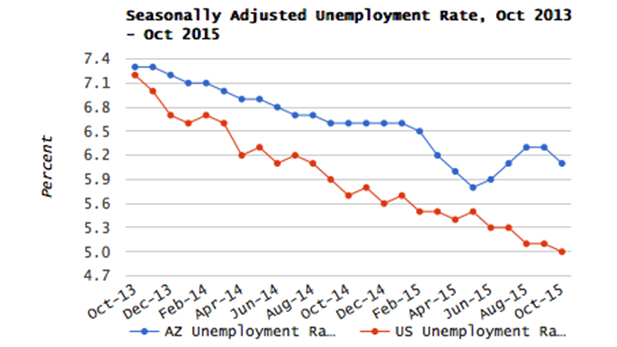 Unemployment rates in Tucson and Arizona both dropped 0.2 percentage points in October, according to the Arizona Office of Employment and Population Statistics.

The strong up and down did not correlate with data gathered by the office looking at the number of jobs added to the state's economy.

“That wasn’t really consistent with a lot of the other data we were seeing, with our stronger employment survey, which was showing relatively moderate to strong gains in the overall economy,” said Research Administrator Doug Walls.

Walls stressed that month-to-month data can sometimes be subject to such swings, but the reports do give a strong indicator of where the state's economy is long term.

Long-term numbers show the Tucson economy is picking up speed in its recovery.

The local unemployment rate went down for the second straight month. It now sits at 5.5 percent, 0.5 percentage points lower than in October of 2014.

“Which translates into about a 2 percent employment gain," said Walls. "So it’s picking up in Tucson as well as around the state. I think we are seeing that slow and moderate growth throughout the entire economy."

The sectors of Education and Health Services and Professional and Business Services have been strong for both Tucson and Arizona, making up more than a third of all net job gains in both places.

Arizona Unemployment Rate Reaches Post-Recession Low Arizona Unemployment Up For Third Consecutive Month Tucson's Biggest Employers
By posting comments, you agree to our
AZPM encourages comments, but comments that contain profanity, unrelated information, threats, libel, defamatory statements, obscenities, pornography or that violate the law are not allowed. Comments that promote commercial products or services are not allowed. Comments in violation of this policy will be removed. Continued posting of comments that violate this policy will result in the commenter being banned from the site.