Tucson will continue to grow slowly in the next two years, and that's a trend the region's planners should get used to, an economist says.

The Eller College of Management's annual economic forecast was released Friday, and it shows more of the same for Tucson. The economy was hit hard by the recession, and it continues to climb slowly out of that low point, said George Hammond, the director of Eller's Economic and Business Research Center.

He talked about his forecast on Metro Week.

"I think we're kind of going to gradually accelerate, but I don't think we're really headed back to the kind of growth rates that we saw in the 30 years before the recession," Hammond said.

That's because of a local and national demographic shift, he said.

"As the population ages, people drop out of the labor force and that just means slower long-run growth," he said. 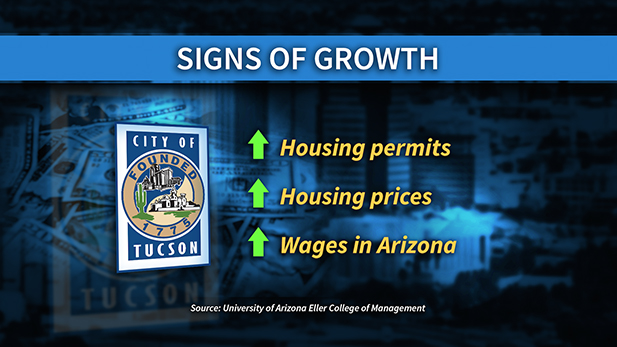 The Tucson region could see a fiscal uptick in the short term, he said, because federal and state spending are expected to increase slightly. Hammond's numbers show an expected increase of less than 1 percent in federal defense spending for the next two years, following many years of deep federal defense spending reductions. Those changes hit Tucson because two of the biggest employers depend on defense spending: Davis-Monthan Air Force Base and Raytheon, a private defense contractor.

State cuts hit the other large employer in Tucson when the higher education budget was cut, taking about $100 million from the University of Arizona in the last year.

The federal cuts hurt Tucson because federal spending is about twice as important here than to the nation as an average, Hammond said.

"The best thing that state and local governments can do is to focus on the building blocks of long-run economic growth, and that boils down to human capital, and in particular, educational attainment," he said.

Therefore, he said, increased public investment in all levels of education would help Tucson's economy.

Another key to the region's future economic success is to find effective ways to move people and information. That, too, takes long-term commitment and investment, Hammond said.

"We need really good ports, so we can move goods and people across the border safely and efficiently," he said. "We need a high quality telecommunications industry. The internet's going to be more important over the next 30 years than it is now."

Pima County officials are looking for a way to pay for infrastructure improvements after a bond question that would have generated more than $200 million from property taxes failed on the November ballot.

"The best way to pay, at this point, is what people will agree to," he said.

Report: 120 Layoffs as Tucson's LivingSocial Call Center Closes METRO WEEK: State Budget Shapes Pima, Tucson Budgets METRO WEEK: 'Small Step' to Fostering Political Civility
By posting comments, you agree to our
AZPM encourages comments, but comments that contain profanity, unrelated information, threats, libel, defamatory statements, obscenities, pornography or that violate the law are not allowed. Comments that promote commercial products or services are not allowed. Comments in violation of this policy will be removed. Continued posting of comments that violate this policy will result in the commenter being banned from the site.