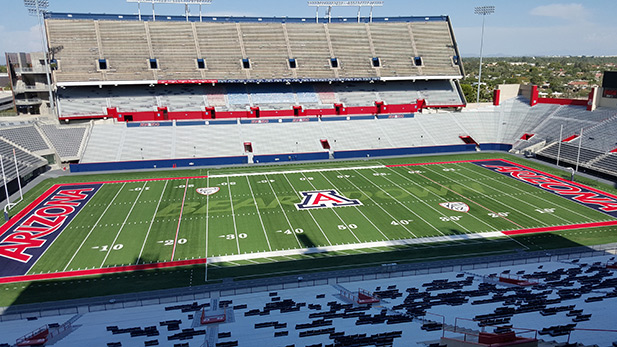 By Julie Luchetta, for AZPM

A proposed $200 fee that would fund renovations to the University of Arizona football stadium has drawn negative reactions from some students and parents.

The one-time fee for incoming students would be added to the roughly $1,000 a year of non-tuition charges already in place.

University of Arizona Athletic Director Greg Byrne said he needs to raise $150 million to improve stadium bathrooms, bleachers and concession stands built in the early 1920s. Games can attract up to 56,000 supporters and Byrne said fans could barely navigate the crowded passageways. The Athletic Department said that renovations will significantly increase revenue and help the southern Arizona football program compete at a national level.

The money raised through the fee would cover some of the makeover costs, while the rest would come from private fundraising and ticket sales.

The U of A Graduate and Professional Student Council polled graduate students and 94 percent said they oppose the fee. Byrne hopes a consensus will be reached before next semester and the Athletic Department will be able to break ground in two to three years.

Colorado parent Todd Hegstrom heard of the proposal while touring campus with his 17-year-old son, Ian, who is considering enrolling as a freshman next fall.

“You’re passing through for four years, should you really be required to pay for a stadium upgrade?” Hegstrom said. “For an out-of-state student, I don’t think it’s the right way to pass on that cost.”

Julie Luchetta is a freelance reporter.

Scientists, Student-Athletes Team Up to Study Concussions in Football University Eliminates 320 Jobs after $28M in State Funds Cut Arizona and Duke agree to basketball series for 2023 and 2024
By posting comments, you agree to our
AZPM encourages comments, but comments that contain profanity, unrelated information, threats, libel, defamatory statements, obscenities, pornography or that violate the law are not allowed. Comments that promote commercial products or services are not allowed. Comments in violation of this policy will be removed. Continued posting of comments that violate this policy will result in the commenter being banned from the site.