Ancient human footprints and agricultural remains unearthed as a road crew prepared for a project on Tucson's northwest side have amazed archaeologists and others who have seen them.

The discovery came during excavation for a new roadway near Sunset Road and Interstate 10. The site will be covered, but county archaeologist Ian Milliken said 3-D technology has allowed creation of images that can be used to preserve the findings.

He said the footprints and other evidence reveal a community of four to eight people, including children. The group was growing crops, most likely corn, Milliken said, and the footprints likely were made in springtime when the fields were wet, followed by a flood on the Rillito that left a layer of silt, preserving the footprints. 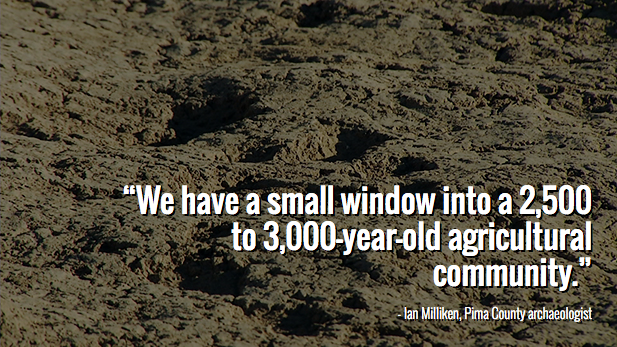 The first footprint was found, in part, with the help of heavy machinery steered by operator Dan Arnit.

Arnit, owner of Innovative Excavating Inc., called the unearthing “one of the most exciting things in my life to finally find that.”

He said one set of footprints shows an individual walking across the field.

Revenge, Blood Feuds Among Early Sonorans Seen in Burials TPD Staffing, Budget Cuts Could Affect Investigations Tucson Area Vets' Cemetery Dedicated in Marana Saturday
By posting comments, you agree to our
AZPM encourages comments, but comments that contain profanity, unrelated information, threats, libel, defamatory statements, obscenities, pornography or that violate the law are not allowed. Comments that promote commercial products or services are not allowed. Comments in violation of this policy will be removed. Continued posting of comments that violate this policy will result in the commenter being banned from the site.