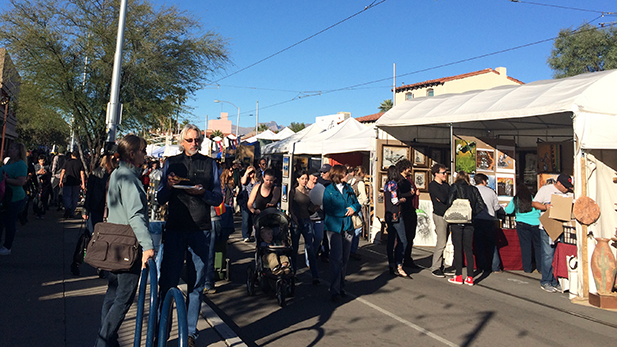 About 300,000 people are expected to descend on the 4th Avenue Spring Street Fair, which runs from 10 a.m. to 6 p.m. Friday through Sunday.

Roads that travel east/west between University Boulevard and Eighth Street are closed within a block on either side of Fourth Avenue.

The lone exception is Sixth Street, which will remain open through the weekend.

Fourth Avenue is the only north/south road that will close for the event.

Its closure will affect the streetcar. Riders who want to travel through the Street Fair area will have to disembark at the Fourth Avenue/Eighth Street or University Boulevard/Third Street stops and ride a Sun Tran bus to the other end of the Street Fair.

4th Ave Street Fair: Big Business for Artists, Shops Researchers Are Studying Economic Impact of the 4th Avenue Street Fair 4th Ave Street Fair Brings Millions into Community Each Year
By posting comments, you agree to our
AZPM encourages comments, but comments that contain profanity, unrelated information, threats, libel, defamatory statements, obscenities, pornography or that violate the law are not allowed. Comments that promote commercial products or services are not allowed. Comments in violation of this policy will be removed. Continued posting of comments that violate this policy will result in the commenter being banned from the site.