Business organizations decry what would be repeat of 2010 boycott over SB 1070. Tweet 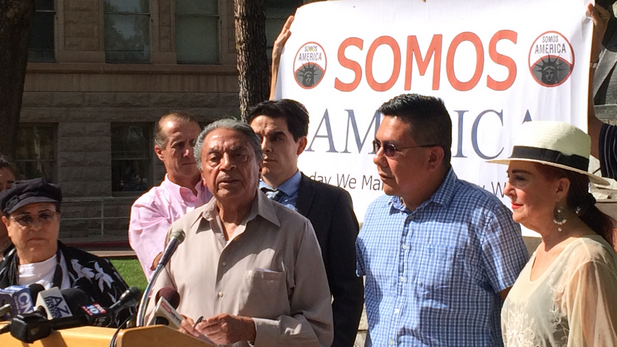 Roberto Reveles, at microphone, and other Somos America members announce the possibility of a renewed boycott over immigration legislation.
Jude Joffe-Block, Fronteras Desk

A pro-immigrant coalition of organizations has threatened to revive an Arizona business boycott if pending immigration-related bills become state law.

In response, Arizona’s business groups have condemned the idea of a boycott.

Six years ago, the coalition "Somos America" - We are America - was involved in a boycott of Arizona in response to SB 1070, Arizona’s immigration enforcement law. Major portions of the law were struck down by the U.S. Supreme Court but a remaining provision requires police to inquire about immigration status when they have a suspicion someone is in the country illegally.

After SB 1070, Arizona’s business community urged the state legislature to focus on immigration reform at the federal level, rather than through more state policies. In the years since, the legislature has not tried to push through any major immigration bills, and the boycott ended.

But this session was different, said ACLU of Arizona policy director Will Gaona.

“We have seen five or six bills seriously considered by the legislature directly dealing with immigration issues,” Gaona said.

While most of these bills are dead or not expected to advance — such as proposals to penalize sanctuary cities, or restrict state funds from supporting refugees or unaccompanied child migrants — a couple of bills could make it to Gov. Doug Ducey’s desk.

One pending bill, SB 1377, would ensure that unauthorized immigrants convicted of certain offenses would face the harshest penalties and be ineligible for probation or plea deals. Another is aimed at making it easier for citizens to sue municipalities and law enforcement agencies that fail to comply with SB 1070.

Some believe that presidential candidate Donald Trump’s anti-illegal immigration message may have spurred lawmakers to introduce such bills this session. At a press conference last month, Francisca Porchas of the immigrant rights group Puente drew that connection.

“The rhetoric of Trump is being seen in practice in flesh and blood here at the Arizona state Legislature with these types of proposals that are being pushed by reactionary racist conservative legislators,” Porchas said.

Last month, activists with Porchas’ group were arrested for civil disobedience at the Capitol when protesting a bill Ducey ultimately signed, HB 2451. It eliminates a policy that transferred unauthorized immigrants for deportation after they had served 50 percent of their prison sentences, replacing it with a requirement immigrants serve 85 percent of their sentence before being turned over to federal authorities for deportation, the same portion U.S. citizens must serve before they can be released.

Last week, Somos America tried another tactic to protest pending immigration-related legislation. The group told Ducey that if any remaining immigration bills pass this session, it may revive the statewide boycott it started after SB 1070.

“Regrettably, the Legislature is once again promoting extremist public policies shamelessly aimed at making life so miserable for undocumented immigrants they will self deport,” Reveles said at a press conference.

“Tuesday night (April 5) our community partners met in an emergency session and agreed to form a special task force to explore the feasibility of restarting the boycott,” Reveles said.

The message is included in a letter that Somos America delivered to Ducey's office. The coalition is asking for a dialogue with Ducey and legislative leaders “to avoid a repetition of the economically disastrous SB 1070-era boycott.”

The Arizona Chamber of Commerce and Industry put out a statement on behalf of several business groups on Wednesday condemning the idea of a boycott, saying it would only hurt the state’s economy and working people.

“The business community in this state has played a very responsible role to guard against legislation that could harm the state’s image and cause economic problems on its own merits,” said Glenn Hamer, president and CEO of the Arizona Chamber of Commerce and Industry. “We don’t need any group coming in and saying let’s boycott Arizona.”

Hamer is no stranger to this debate. He was part of the effort to lobby the state legislature to leave immigration policy up to the federal government, after the state’s black eye over SB 1070.

But Hamer supported the bill Ducey signed that requires unauthorized immigrants to serve more of their criminal sentences, saying it was good criminal justice policy. The Arizona Hispanic Chamber of Commerce initially came out against the bill and all the other immigration bills that remain, but reversed its position on HB 2451 after Ducey signed it.

Hamer said the Arizona Chamber looked at the immigration-related bills that are left, and encouraged others to get the facts on the legislation before jumping to conclusions.

“We understand it has been a difficult presidential campaign season, where a lot of things have been said, that I have personally been on record as saying are way, way, way over the top and offensive,” Hamer said. “But I would just urge people to really carefully look at some of these pieces of legislation to make sure that they fit into that bucket.”

As for the bills that could actually hit Ducey’s desk this session, many analysts agree the bill that would make unauthorized immigrants convicted of crimes ineligible for early release or probation, SB 1377, could have a chance of being signed.

"They need to suffer the full consequences of their criminal actions," Kavanagh said. "Hopefully that will deter them once they are deported from ever returning."

Opponents said the bill treats people convicted of the same crime differently based on citizenship or nationality, and uses state law to inappropriately punish someone for violating federal immigration law, a practice that federal courts have already ruled against in previous legal battles.

Several civil rights advocates who were involved in challenging SB 1070 in court, including the ACLU of Arizona, the Mexican American Legal Defense and Education Fund and the National Immigration Law Center, wrote a letter to Ducey urging him to oppose SB 1377.

The groups said the bill was unconstitutional and would damage Arizona.

"Moreover, enacting this legislation would send a clear signal that Arizona continues to adhere to the antiquated and discredited discriminatory approach that gave us S.B. 1070," the letter said. "The public message and understanding in Latino communities, including potential trading partners, would be that little has changed."

METRO WEEK: Grijalva Supports Obama Immigration Actions; Expands Leadership Role Grijalva: Boycott Still On! Ducey tests positive for COVID-19
By posting comments, you agree to our
AZPM encourages comments, but comments that contain profanity, unrelated information, threats, libel, defamatory statements, obscenities, pornography or that violate the law are not allowed. Comments that promote commercial products or services are not allowed. Comments in violation of this policy will be removed. Continued posting of comments that violate this policy will result in the commenter being banned from the site.