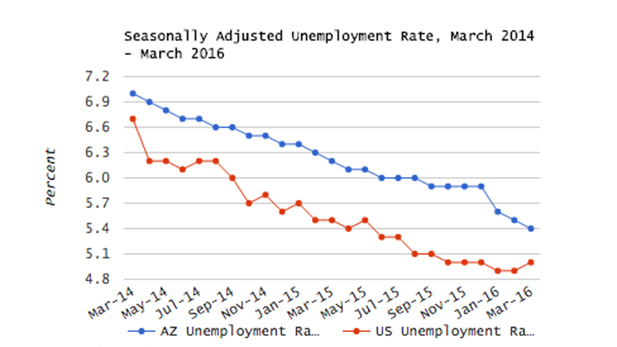 The state's employment market added 12,200 jobs, all of which came in the private sector.

The head of the team that assembles the monthly report said the report is a positive one.

“We are seeing the employment side of the economy start to pick up," said Doug Walls, the state's director of economic analysis. "This is the ninth consecutive month of over-the-year growth above 3 percent for the private industry.”

In the past year, Arizona has added 86,000 non-farm jobs, all of which came in the private sector.

Arizona Unemployment Grows for Fourth Straight Month Arizona Unemployment Up for Third Straight Month, to 5.8% Tucson's Job Market Grows Faster Than National Pace
By posting comments, you agree to our
AZPM encourages comments, but comments that contain profanity, unrelated information, threats, libel, defamatory statements, obscenities, pornography or that violate the law are not allowed. Comments that promote commercial products or services are not allowed. Comments in violation of this policy will be removed. Continued posting of comments that violate this policy will result in the commenter being banned from the site.