Tools and Trade In All 50 States

Tucson resident plans to travel across the country to "get gigs" and meet new people. by Tony Paniagua Tweet 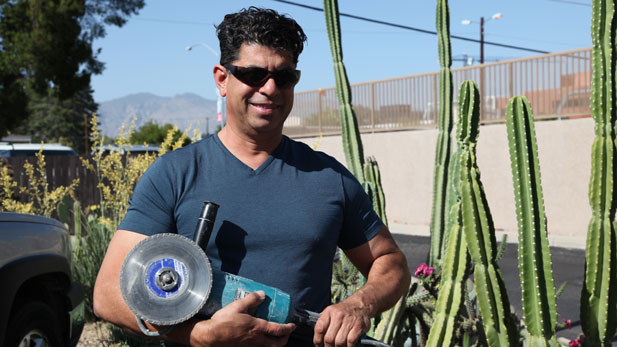 It's the type of thing many people dream about but never do: visit all 50 states as part of a unique once-in-a-lifetime journey.

Juan - who also goes by John- began planning his departure in 2015, and he's ready to hit the road May 5 by driving from Arizona to Nevada and then to Utah, Colorado, New Mexico and beyond.

For the past four decades, 54-year-old Bayardo has held positions such as carpenter, bartender, mason, window cleaner, and meat cutter.

Now he's taking his pick up truck, tools, talents and smartphone around the country where he will seek jobs on the Internet such as craigslist or Facebook.

Other than a few places, he doesn't have any definite cities or jobs lined up for his adventure.

Some people think he's "crazy" but he isn't phased by that.

"I've always had kind of an adventurous spirit and I'm just pursuing it to the ultimate here I think," Bayardo said.

He registered a website for himself and plans to write a book about his experiences when he's finished in six to eight months, although he will let the road determine his schedule.

And in case you're wondering, he'll drive to the 48 contiguous states but fly from Seattle to Alaska and from San Francisco to Hawaii with his tools.

Building a Journey Across America Tucson's Job Market Grows Faster Than National Pace 'Jack of All Trades' Helps Tucson District Weather Budget Cuts
By posting comments, you agree to our
AZPM encourages comments, but comments that contain profanity, unrelated information, threats, libel, defamatory statements, obscenities, pornography or that violate the law are not allowed. Comments that promote commercial products or services are not allowed. Comments in violation of this policy will be removed. Continued posting of comments that violate this policy will result in the commenter being banned from the site.