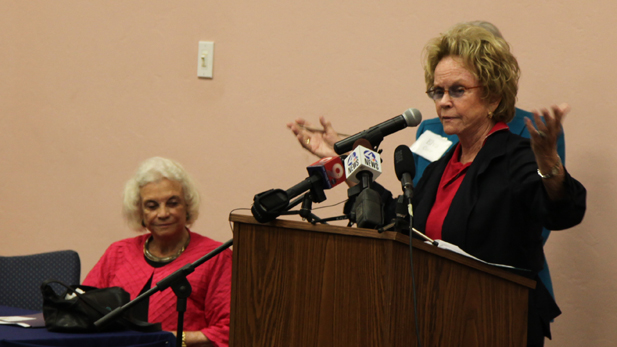 Ann Day speaks at an event in Tucson in July 2012, along with her sister, Sandra Day O'Connor.
Christopher Conover

She died after the car she was driving was hit first by a car that crossed the median, then by another vehicle behind her, a sheriff's deputy reported. The crash was on East Ina Road near the Westward Look Resort.

Day served on the county board from 1999 to 2011, representing District 1. Before that, she was a state senator for 10 years.

Day was the sister of Sandra Day O'Connor, retired U.S. Supreme Court justice. The Day sisters grew up on a Graham County ranch that their grandfather homesteaded in the 19th century.

Former Arizona State Treasurer Carol Springer Dead at 81 Man Found Guilty in 2016 Death of Former Supervisor Ann Day Pima County Wins Tax Lawsuit Against State Legislature
By posting comments, you agree to our
AZPM encourages comments, but comments that contain profanity, unrelated information, threats, libel, defamatory statements, obscenities, pornography or that violate the law are not allowed. Comments that promote commercial products or services are not allowed. Comments in violation of this policy will be removed. Continued posting of comments that violate this policy will result in the commenter being banned from the site.