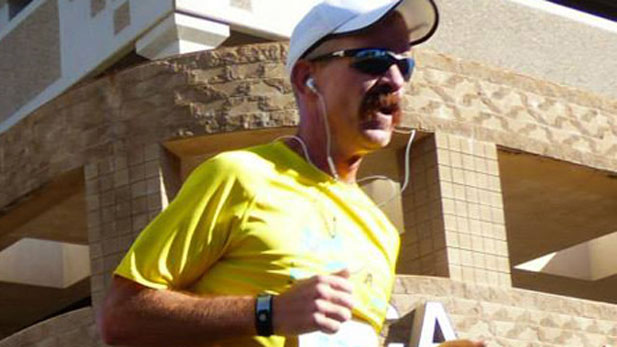 The next time you drive between Tucson and Phoenix, think about what it would take to travel that distance without a car or bike. Here is an interview with a Tucsonan who did just that...

Geoff Schmidt began his run at 7 p.m. on a recent Friday, when early monsoon weather lowered the temperature, but raised the humidity.

He made the 125-mile trip in 2 days, running mostly at night using both trails and frontage roads. Schmidt started at the Cancer Center at the University of Arizona, and was greeted by a small group of friends and family at the finish line in the parking lot of the U of A Cancer Center in downtown Phoenix.

"There were some detours, like a car crash on (Highway) 87 and some course changes, but it still came out to a little over 125 miles total in two days," Schmidt said.

Schmidt, 44, took up running four years ago to better his health, lose weight and help kick his two-decade smoking habit.

The Tucson-to-Phoenix super marathon was one of his personal goals and a way to raise money for cancer research through private donations and underwriting from local businesses.

Schmidt also said he was looking for a way to combat the helplessness he experienced when his brother-in-law Steve died from brain cancer in 2015.

In the end, Schmidt said his run raised more than $2,000 for cancer research, and word of his achievement is still helping to bring in donations.

His next goal? Qualifying to run in the 2017 Boston Marathon.

Brain Cancer Study: Some Tumors More Vulnerable to Traditional Treatments Breast Cancer Awareness: Chance to Show Support High Hopes for Tucson, UA Athletes at Rio Olympics
By posting comments, you agree to our
AZPM encourages comments, but comments that contain profanity, unrelated information, threats, libel, defamatory statements, obscenities, pornography or that violate the law are not allowed. Comments that promote commercial products or services are not allowed. Comments in violation of this policy will be removed. Continued posting of comments that violate this policy will result in the commenter being banned from the site.