Arizona Unemployment Up for Third Straight Month, to 5.8%

Joblessness up for the third straight month, despite better-than-normal summer jobs slump. by Zachary Ziegler Tweet 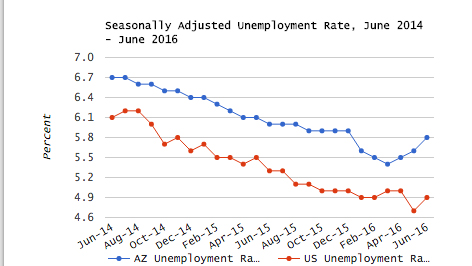 Arizona's unemployment rate rose from from 5.6 percent in May to 5.8 percent in June, the state Department of Administration reported Thursday.

June is usually not a good month for Arizona's job market. Since the end of the recession, the state has lost an average of 52,400 jobs in the month, mostly because of educators taking the summer off.

Despite that, last month was better than normal, with a loss of 39,700 jobs.

The biggest losses occurred in the government and tourism.

“Typically in June we see large seasonal losses in state and local education as the school year ends," said Arizona Department of Administration's Doug Walls. "We see this in government and leisure and hospitality, food services, which have contracts with the schools.”

Arizona's job market has added more than 80,000 jobs in the past 12 months. All those gains have come in the private sector.

September Sees Back-to-School Boost for Arizona Employment Arizona Unemployment Drops, Halts Four-Month Trend Arizona Unemployment Grows for Fourth Straight Month
By posting comments, you agree to our
AZPM encourages comments, but comments that contain profanity, unrelated information, threats, libel, defamatory statements, obscenities, pornography or that violate the law are not allowed. Comments that promote commercial products or services are not allowed. Comments in violation of this policy will be removed. Continued posting of comments that violate this policy will result in the commenter being banned from the site.