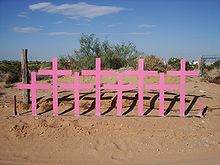 As statistics go, Juarez is the most violent city on earth. Tucson writer Charles Bowden, who's been covering border issues for three decades, turns his sights on Juarez in his new book Murder City: Ciudad Juarez and The Global Economy’s New Killing Fields.

Bowden says Juarez is at the epicenter of a new wave of violence in Mexico, fueled by politics, corruption and poverty. Bowden isn't afraid to share his opinions on the War on Drugs ("a failure") and some Arizona politicians ("they're lairs.") Bowden also reads from his new book.

Republican lawmakers propose expanding state court of appeals Praising the earned beauty of "The Crone Body". Ducey signs bill directing $335M to build border fence
By posting comments, you agree to our
AZPM encourages comments, but comments that contain profanity, unrelated information, threats, libel, defamatory statements, obscenities, pornography or that violate the law are not allowed. Comments that promote commercial products or services are not allowed. Comments in violation of this policy will be removed. Continued posting of comments that violate this policy will result in the commenter being banned from the site.