Feeding Our Future: Incubating Food Start-Ups in the City of Gastronomy 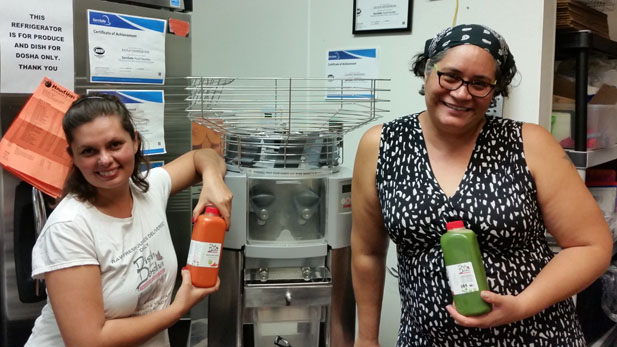 Dish for Dosha owner Cecy Arosemena (left) and Liane Hernandez of the YWCA of Southern Arizona. Hernandez opened the Y's kitchen to Dish for Dosha as an experiment in incubating a food business.
Laura Markowitz

“Feeding Our Future” is made possible with the support of the Zuckerman Family Foundation.

Where are the UNESCO Ciities of Gastronomy? Click here to listen to the list, recited by the City of Tucson's Jonathan Mabry.
The City of Gastronomy designation shines a new light on Tucson’s food scene. Independently owned food businesses are the largest-growing sector in Tucson’s economy, from food trucks to independent restaurants to salsa makers. The food industry accounts for 14 percent of all jobs in the city. But launching a successful food business takes more than just a good recipe, especially for low-income entrepreneurs.

At the YWCA of Southern Arizona’s west side campus, a group of women are hard at work in the kitchen. They’re juicing carrots. This is the operations center for a company called Dish for Dosha.

How did a juice company end up at the Y? It started when Cecilia Arosemena graduated from the Arts Institute and wanted to launch a business. She’d also studied Ayurveda, the ancient Indian tradition of natural healing, and her idea was to start a personal catering service based on Ayurvedic principles. But she couldn’t find a commercial kitchen to use for free, and she couldn’t afford to rent on her waitressing salary.

“And then one day I get the news that I may die,” says Arosemena. “I have a two-pound liver tumor that is choking my vena cava, and at any moment my blood flow could stop and I could drop.” 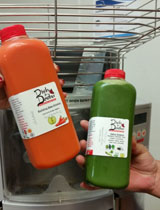 Dish for Dosha is an Ayurvedic juice company that operates out of the kitchen at the YWCA of Southern Arizona.

Before her surgery, her friend and mentor came to see her. Liane Hernandez is Executive Chef and Community Life Director at the YWCA. “And Liane said, ‘If you don’t die, you can use my kitchen!’ ”

Arosemena survived, and Hernandez kept her promise. The YWCA decided to use Dish for Dosha as an experiment to see what it would take to incubate a food start-up. Hernandez says they had a bigger plan in mind:

“Could we advocate on behalf of other restaurants and community spaces opening their doors to these food entrepreneurs?”

“Sunshine Burst, which has lots of ginger and turmeric. Root it Down, with turmeric and beets and carrots. And Spice it Clean, which is very heavy on the ginger,” she says.

She started making juice, and then quickly realized she didn’t know how to run a business. So she turned to the Women’s Business Center (WBC). Conveniently for Arosemena, it’s also housed at the YWCA.

“Our mission is to level the playing field for women, immigrant and low-income entrepreneurs,” says WBC director Marisol Flores Aguirre, “helping them take their business from that thought process to let’s plan it; let’s grow it; let’s build it; let’s fund it.”

“Our mission is to level the playing field for women, immigrant and low-income entrepreneurs,” says WBC director Marisol Flores Aguirre, “helping them take their business from that thought process to let’s plan it; let’s grow it; let’s build it; let’s fund it.” 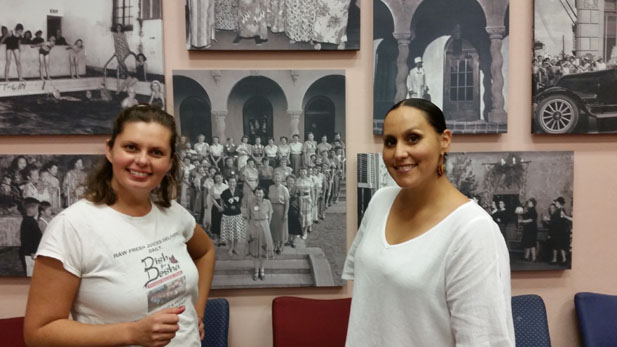 Chef Cecy Arosemena (left) and Marisol Flores-Aguirre, director of the Women's Business Center of Southern Arizona. The WBC is housed at the YWCA and serves more than a thousand clients a year -- the majority are food entrepreneurs.
Laura Markowitz

The WBC offers business consulting and technical assistance, and it connects entrepreneurs to people who can help, like local lawyers and lenders, and commercial realtors. Most of the WBC’s services are free.

The WBC set Arosemena up with a business mentor who helped her develop a business plan. They also connected her with the UA Eller College of Management, where a team of undergrads came up with ideas for expanding Dish for Dosha’s market. Within a year of starting, Arosemena was paying two part-time staff to keep up with orders.

Dish for Dosha still hadn’t broken into the wholesale market. To scale up, Arosemena needed more juicers. But she couldn’t afford them. She was still waitressing at the Café Poca Cosa to support herself. Who would give her a loan?

After she was turned down twice, the WBC found a potential lender. Flores-Aguirre went with her when Arosemena made her pitch to the Community Investment Corporation. She got a loan of $25,000.

Now 70 stores in Arizona carry Dish for Dosha. Arosemena says her sales grew 400 percent and her employees now work 30 hours a week. She pays them above minimum wage. In June she started paying herself for the first time.

This is the outcome the YWCA hoped for: Dish for Dosha makes healthy food available in the community and creates good jobs for women. But is this an experiment that can be replicated?

This is the outcome the YWCA hoped for: Dish for Dosha makes healthy food available in the community and creates good jobs for women. But is this an experiment that can be replicated?

The YWCA shelters Arosemena – she doesn’t pay rent or utilities, or even buy cleaning supplies.

According to Flores-Aguirre, the WBC helps more than a thousand clients a year, and the majority are food entrepreneurs. They can’t all use the Y’s kitchen!

Flores-Aguirre and Liane Hernandez put together a list of all the business in Tucson that have commercial kitchens that could potentially share space with a start-up. It came to around 100. They called them all. Five were willing to rent. None were willing to share space for free.

So the YWCA decided to build a commercial kitchen for low-income food entrepreneurs. They already had a location: the House of Neighborly Service (HNS), in South Tucson.

So the YWCA decided to build a commercial kitchen for low-income food entrepreneurs. They already had a location: the House of Neighborly Service (HNS), in South Tucson.

The YWCA took over the 70-year-old community center last year. 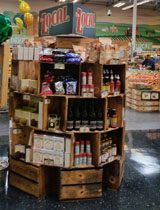 Kerri Lopez-Howell is HNS director. She says food insecurity is a big problem in the neighborhood, but food is also a big part of South Tucson’s culture and people here are already entrepreneurs – they just have to do it under the radar. “A lot of people sell their tamales outside Food City,” she says, “and you can’t technically do that unless you have the handling license.”

The YWCA raised funds from a $75,000 Community Development Block Grant and private donations. Hernandez says construction on the kitchen starts in October. Marisol Flores-Aguirre says the kitchen is an opportunity for low-income people to jump on the City of Gastronomy bandwagon.

But is there a market for local products? Erika Mitnik White, Southern Arizona Director of Local First Arizona, says there is. The local business coalition just held its 7th Annual Farmer+Chef Connection. It’s an expo at the Tucson Convention Center where local producers show their wares to buyers—from chefs, to hospital and school food services managers.

The City of Gastronomy is an international brand, but the designation doesn’t mean anything in itself, says Jonathan Mabry, who helped to write the UNESCO application. (He’s the City of Tucson’s Historic Preservation Officer) There’s no money in it for Tucson. But it’s an opportunity for enterprising people to cash in on Tucson’s food heritage and culture. Especially if they have a kitchen.

Tune in to Arizona Spotlight or log on to AZPM.org next week for Feeding Our Future, Episode 2: Getting Native Foods Back on the Plate 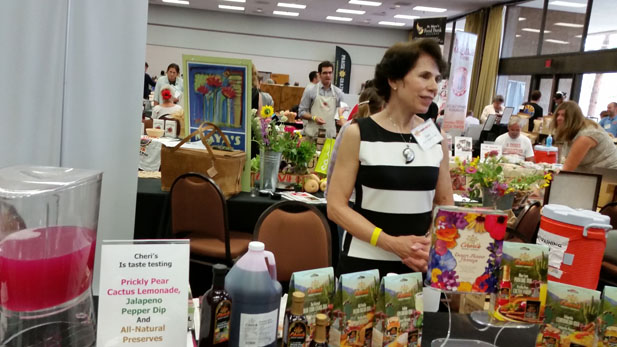 Edible Baja Won't Turn the Page, Publisher Says Feeding Our Future: Shortening the Line Acclaimed World Music Artist Katia Cardenal Visits Tucson
By posting comments, you agree to our
AZPM encourages comments, but comments that contain profanity, unrelated information, threats, libel, defamatory statements, obscenities, pornography or that violate the law are not allowed. Comments that promote commercial products or services are not allowed. Comments in violation of this policy will be removed. Continued posting of comments that violate this policy will result in the commenter being banned from the site.