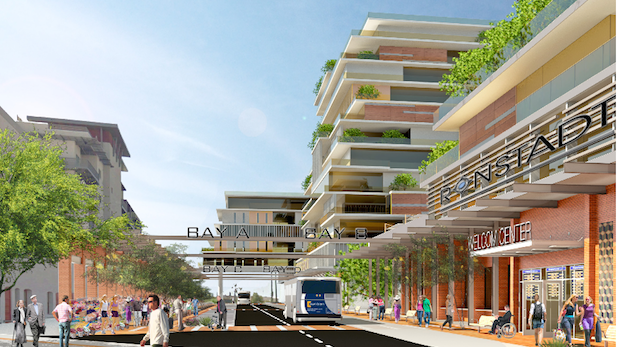 Two proposals for development in Tucson’s resurgent urban core are on the City Council agenda for Tuesday.

The first is council approval of a predevelopment plan for the Ronstadt Transit Center by Tucson’s Peach Properties. The $67 million project will include up to 400 apartments, parking, retail and public-transit space. Completion is expected in phases stretched over the next four years.

The second is a proposed $7.2 million sale of city land west of downtown in the Mercado area to the Rio Nuevo district for Caterpillar Inc.’s division headquarters. A report with the City Council agenda said the sale price will be decided from the $13.3 million the city owes Rio Nuevo for another downtown project.

Flagstaff Elects Its First African-American Mayor Lawmaker Wants Sanctions if Tucson Destroys Seized Guns Agency Cooperation Brought Caterpillar to Tucson, Exec Says
By posting comments, you agree to our
AZPM encourages comments, but comments that contain profanity, unrelated information, threats, libel, defamatory statements, obscenities, pornography or that violate the law are not allowed. Comments that promote commercial products or services are not allowed. Comments in violation of this policy will be removed. Continued posting of comments that violate this policy will result in the commenter being banned from the site.