The start of the academic year means roughly 30,000 people were hired last month, according to state data. by Zachary Ziegler Tweet 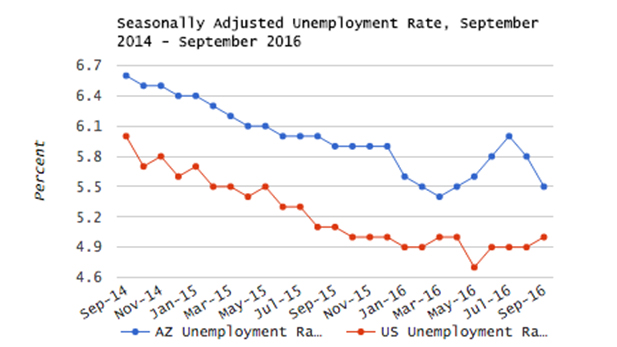 Arizona's unemployment rate decreased to 5.5 percent last month, according to a report from the state Office of Economic Opportunity.

The post-recessionary average gain in the month is 25,700.

School-year hiring tends to show up in August, September and October job reports.

“It can vary because of the timing that each school is reporting," said the agency’s Doug Walls. "We did see above-average increase in state and local education in September, but that could be offset by numbers that we see in the coming months or numbers that we have seen in past months.”

The school year also played a role in the private sector's biggest area of growth in September.

The educational services subsector added 5,100 jobs as a result of for-profit colleges and universities gearing up for the fall semester.

Tucson Housing Prices Grow Faster Than US Average Arizona Unemployment Drops, Halts Four-Month Trend Arizona Unemployment Grows for Fourth Straight Month
By posting comments, you agree to our
AZPM encourages comments, but comments that contain profanity, unrelated information, threats, libel, defamatory statements, obscenities, pornography or that violate the law are not allowed. Comments that promote commercial products or services are not allowed. Comments in violation of this policy will be removed. Continued posting of comments that violate this policy will result in the commenter being banned from the site.