Say the month of games is the largest pre-season professional event in the country. by Christopher Conover Tweet 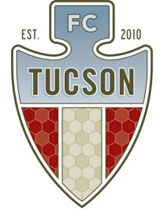 FC Tucson and the organizers of the Desert Diamond Cup have announced the Major League Soccer teams coming to Tucson in February.

A number of players on the teams have ties to the Old Pueblo, having spent time here playing for FC Tucson.

Organizers say the event is the largest pre-season event for Major League Soccer in the country, adding that it’s a chance for fans to see international stars in their own backyard.

During the month-long event, teams will compete in the Desert Friendlies and the Desert Diamond Cup.

FC Tucson Acquisition an 'Investment into Youth,' Manager Says Desert Diamond Cup Brings Major League Soccer to Tucson Do Thoughts of Death Lead to Higher Athletic Performance?
By posting comments, you agree to our
AZPM encourages comments, but comments that contain profanity, unrelated information, threats, libel, defamatory statements, obscenities, pornography or that violate the law are not allowed. Comments that promote commercial products or services are not allowed. Comments in violation of this policy will be removed. Continued posting of comments that violate this policy will result in the commenter being banned from the site.