New Exhibit Looks At Both Sides Of The Geronimo Story

A new exhibit at the Arizona History Museum in Tucson looks at the life and legacy of Geronimo. The Apache warrior and medicine man led a resistance against the U.S. Army throughout the 1870's and 1880's. During that time, his abilities at waging warfare and eluding capture became the stuff of legend. His final surrender in southern Arizona in 1886 to Brig. Gen. Nelson Miles marked the end of an era in western American history. 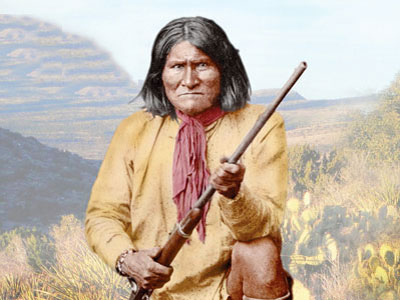 Geronimo spent the rest of his life in captivity. But he also became a celebrity, and was allowed to appear in parades and other public events. He toured with a Wild West show and was exhibited at the 1904 St. Louis World's Fair. In 1906, he dictated his autobiography, Geronimo: His Own Story. At the time of his death in 1909 at age 86, he had achieved a considerable level of fame. But he was still, technically, a "prisoner of war."

The new exhibit was curated by Jay Van Orden. He enlisted Geronimo's ancestors for help in telling the Apache side of the story. It features a number of authentic artifacts owned by Geronimo and others from that era. Also on display are numerous historical photographs and examples of Geronimo in popular culture.

Mark Duggan visited the Arizona History Museum and talked with Van Orden about the exhibit and about Geronimo's legacy.

Virgina Woolf's "Mrs. Dalloway" at The Rogue Theatre. International exhibition focuses on children's pandemic self-portraits Fire restrictions take effect in national forests in Arizona
By posting comments, you agree to our
AZPM encourages comments, but comments that contain profanity, unrelated information, threats, libel, defamatory statements, obscenities, pornography or that violate the law are not allowed. Comments that promote commercial products or services are not allowed. Comments in violation of this policy will be removed. Continued posting of comments that violate this policy will result in the commenter being banned from the site.