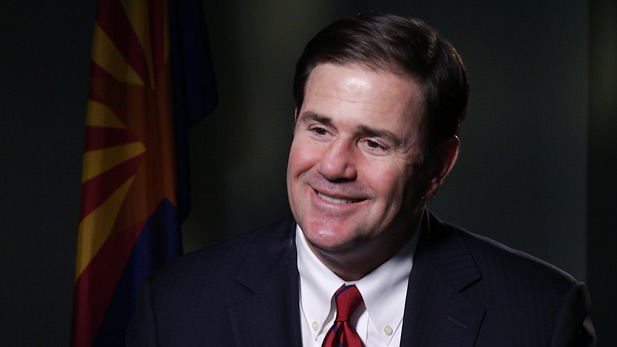 Governor Doug Ducey, during an interview with AZPM's Lorraine Rivera from January 2016.
AZPM

Gov. Doug Ducey thinks Tucson has shown strong economic improvement during his two years in office, and a recent announcement by Raytheon Missile Systems that it will add 2,000 new employees over the next five years is the latest example.

Ducey also cited the opening of a new Comcast facility, the relocation of an office by Caterpillar and a new warehouse for Home Goods as further proof.

When it comes to adding tech sector jobs, such as those that will make up much of Raytheon's pending hires, Ducey said the state's post-secondary education system is key.

“With the engineering students that are coming out of these programs, and the companies that are being attracted to our state - both in the Tucson corridor and other places - really show we can compete with anyone,” said Ducey.

He said building an educated workforce is an important reason for the state to continue support of its universities, and work can be done to push younger students into fields with good employment prospects.

'Hack Arizona' to Draw Hundreds of Young Innovators Raytheon Will Add 2,000 High-Tech Jobs in Tucson Raytheon President: Defense Spending Bill May Allow Growth
By posting comments, you agree to our
AZPM encourages comments, but comments that contain profanity, unrelated information, threats, libel, defamatory statements, obscenities, pornography or that violate the law are not allowed. Comments that promote commercial products or services are not allowed. Comments in violation of this policy will be removed. Continued posting of comments that violate this policy will result in the commenter being banned from the site.