Three Dozen Vets Honored in Tucson for Service in Vietnam

Part of a 13-year commemoration that will go through 2025. Tweet 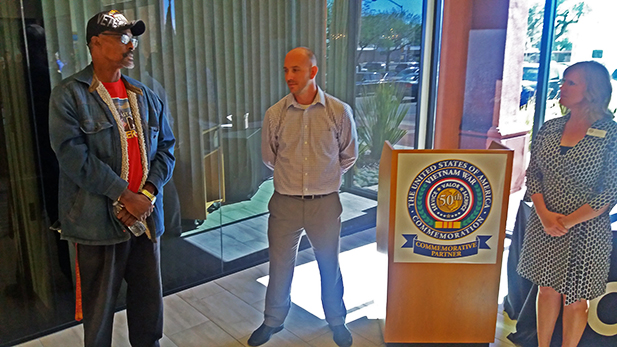 The Tucson Vet Center honored Vietnam veterans last week as part of an ongoing celebration to mark the 50th anniversary of the Vietnam War.

Among the approximately three dozen veterans honored was Peter Starks, who served as a corporal in the Marines.

Starks entered the war at age 17, skipping his senior year of high school. He deployed to the city of Da Nang on Vietnam’s central coast.

There he was wounded twice in 1968, hit in the forehead by shrapnel and shattering his knees in a tower explosion a few months later. He refused to come home after both injuries.

Starks says the war altered his life forever but he cherishes the fact he’s able to touch bases with his brothers today.

“I tell you what, I wouldn’t change nothing. I wouldn’t change anything because the relationships that I built there, those were the only people I ever trusted in my entire life, to include my family,” Starks said.

75 Years Later, USS Arizona Sailor Recalls Attack on Pearl Harbor Veterans Day Parade: Remembering Pearl Harbor Visit Camp Bravo, a Base for Homeless Vets in Tucson
By posting comments, you agree to our
AZPM encourages comments, but comments that contain profanity, unrelated information, threats, libel, defamatory statements, obscenities, pornography or that violate the law are not allowed. Comments that promote commercial products or services are not allowed. Comments in violation of this policy will be removed. Continued posting of comments that violate this policy will result in the commenter being banned from the site.