As Primary Election Day neared one long time politician tried to give the next generation a helping hand. by Christopher Conover Tweet 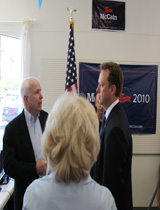 Senator John McCain began the last day of primary election campaigning in Tucson. He stopped by his campaign office to thank volunteers but also to get them fired up. But it wasn’t his candidacy he was pushing, instead he spent most of his time talking up Jonathan Paton who is running for Congress.

Paton, resigned his seat in the state Senate earlier this year in order to run for Congress in District 8. Political observers assumed Paton was the favorite in the race, but political newcomer Jesse Kelly is keeping the race for the GOP nomination close. He even out fundraised Paton in the last reporting cycle. Kelly has postured himself as the conservative, Tea Party candidate in the race.

In his remarks to his volunteers, Senator McCain called Paton the right person for the job who could hit the ground running. He also praised Paton’s conservative credentials and he told his volunteers when they are on the phone drumming up voters for his campaign to remind everyone to vote for Paton.

The winner of the Congressional District 8 race for the GOP will face incumbent Gabrielle Giffords in November.

Tucson City Council passes resolution supporting abortion rights Ducey OKs $18B budget upping school, infrastructure spending Arizona lawmakers approve bipartisan $18 billion budget
By posting comments, you agree to our
AZPM encourages comments, but comments that contain profanity, unrelated information, threats, libel, defamatory statements, obscenities, pornography or that violate the law are not allowed. Comments that promote commercial products or services are not allowed. Comments in violation of this policy will be removed. Continued posting of comments that violate this policy will result in the commenter being banned from the site.