The 9th Circuit Court of Appeals is taking issue with part of Arizona's voting laws. by Christopher Conover Tweet 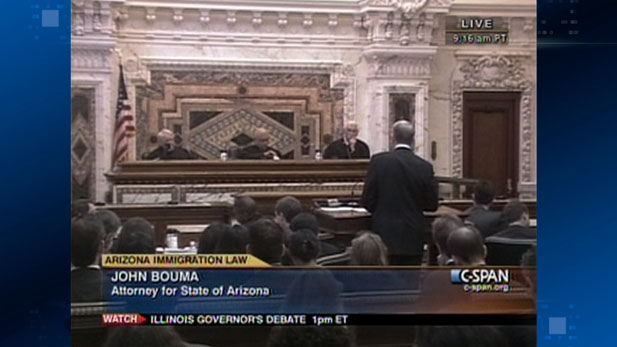 Attorneys for the state of Arizona and the US Dept of Justice appeared in front of the 9th Circuit Court of Appeals to argue SB 1070.
AZPM

The U.S. 9th Circuit Court of Appeals has struck down part of Arizona’s voter requirements. The requirements, which were approved by voters in 2004 in what was known as Proposition 200, make it necessary that people registering to vote show documentary proof of citizenship and that registered voters provide proof of identification when they arrive at the polls to vote.

In a 2-1 ruling, judges on the 9th Circuit--including retired US Supreme Court Associate Justice Sandra Day O’Conner--found that the proof of citizenship requirements put into Arizona law are in conflict with federal law. In the 83-page ruling, the judges wrote that demanding proof of citizenship puts burdens not required by federal law on someone wishing to register to vote. The judges did, however, allow the identification at the polls requirement to stand.

The ruling comes just seven days before Election Day, but Arizona Secretary of State Ken Bennett says it should have no impact on the voting this year. Bennett, who is running for the Secretary of State’s office, says he does plan on appealing the ruling.

Listen to a brief interview with Arizona Secretary of State Ken Bennett:

Attorneys for the state of Arizona and the US Dept of Justice appeared in front of the 9th Circuit Court of Appeals to argue SB 1070.

The Buzz: Primary Election 2022 is in the books Judge tosses Arizona suit over limits on virus relief funds Can’t hurt to ask: Arizona lawmakers raise earmark requests by $194 million
By posting comments, you agree to our
AZPM encourages comments, but comments that contain profanity, unrelated information, threats, libel, defamatory statements, obscenities, pornography or that violate the law are not allowed. Comments that promote commercial products or services are not allowed. Comments in violation of this policy will be removed. Continued posting of comments that violate this policy will result in the commenter being banned from the site.