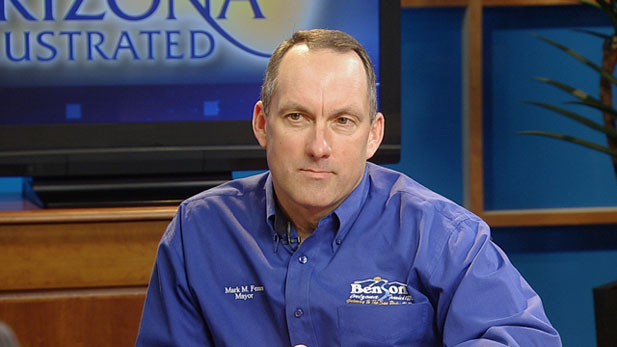 Mark Fenn, the Mayor of Benson, joins the studio.
AZPM

The Southern Pacific Railroad spawned the founding of the city of Benson in 1880, but these days it's best known as the gateway to Kartchner Caverns State Park.

Mark Fenn has served as mayor of this 5,000-resident community for the past eight years, and is set to step down from his position in May. He joins the studio to reflect on his time in office, his town's work to stay afloat and grow despite difficult times and little state help, and the work ahead for future city leaders.

Kimberly Craft sits down with Mark Fenn, the Mayor of Benson.

Bankruptcies in AZ dropped in 2022 Open Mic Night opens opportunities and cooperation in Sierra Vista Judge tosses Arizona suit over limits on virus relief funds
By posting comments, you agree to our
AZPM encourages comments, but comments that contain profanity, unrelated information, threats, libel, defamatory statements, obscenities, pornography or that violate the law are not allowed. Comments that promote commercial products or services are not allowed. Comments in violation of this policy will be removed. Continued posting of comments that violate this policy will result in the commenter being banned from the site.