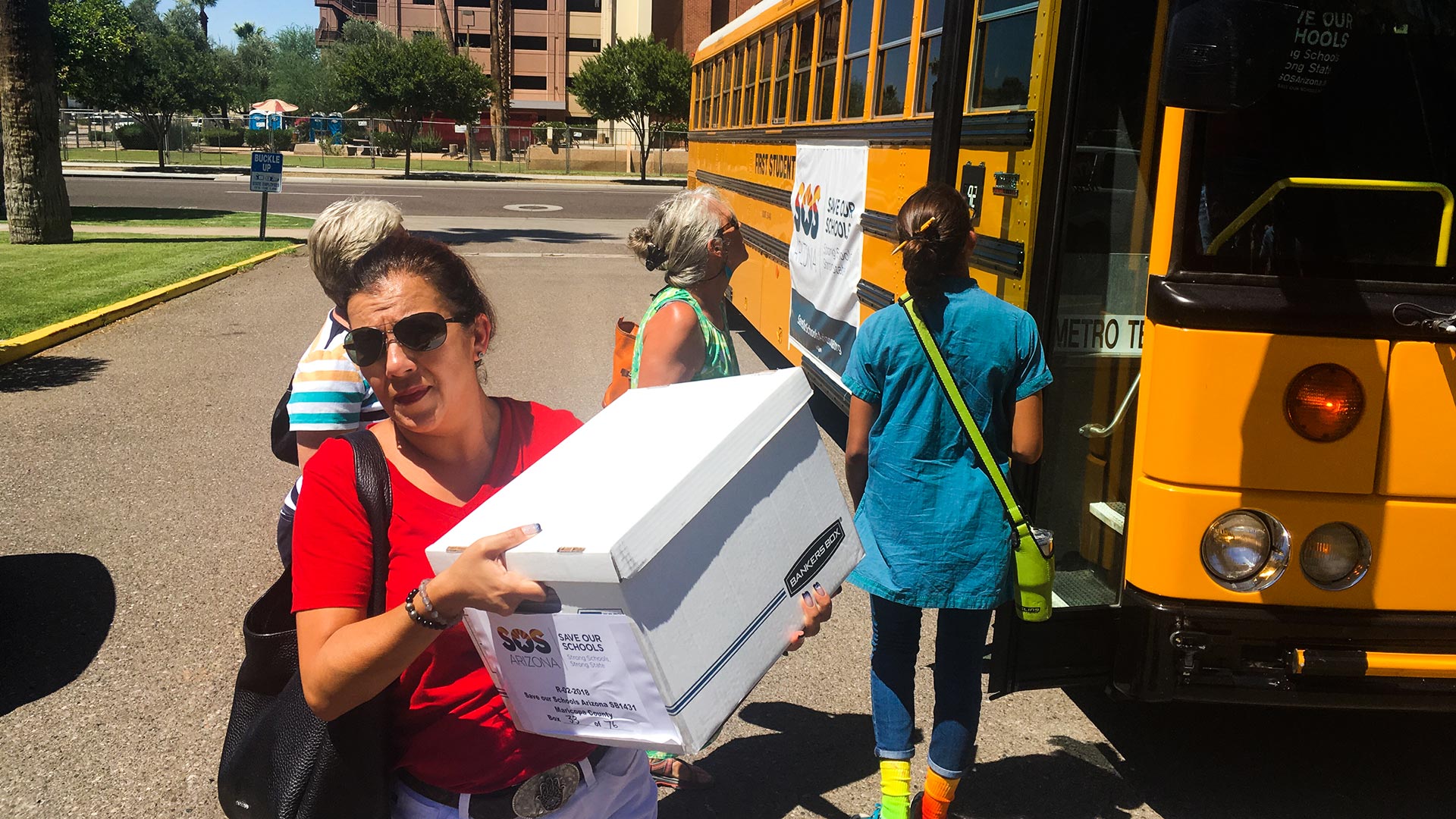 The group Save Our Schools worked to gather signatures opposing legislation that would expand school vouchers in Arizona.
AZPM Staff

PHOENIX — A lawsuit seeking to invalidate a voter referendum that is blocking Arizona's massive new school voucher program was thrown out by a Maricopa County Superior Court judge who said voucher backers have no right to sue, according to a ruling made public Tuesday.

Margaret Mahoney's order is a major victory for the grassroots group of parents and teachers that collected signatures to block the law.

Barring a repeal of the 2017 law backed by Republican Gov. Doug Ducey or a successful appeal, it will remain on the November ballot.

Mahoney's ruling says voucher supporters can't sue because the Legislature removed that right in 2015 before restoring it during last year's legislative session. Mahoney rejected the lawsuit on other grounds in case that reasoning is rejected on appeal and said she might let it proceed on others.

The voucher law was a major priority of Ducey and was backed by school choice group American Federation for Children, formerly led by now-Education Secretary Betsy DeVos.

A group of parents and teachers who argued universal vouchers will sap public school funding fought to block the law under a provision of the Arizona Constitution that allows statewide votes on laws passed by the Legislature. The rarely used provision requires the rapid collection of tens of thousands of voter signatures in just a few months.

A no vote on the November ballot will reject the sweeping voucher law, which expands eligibility to all students by 2022, but caps enrollment at about 30,000. They are referred to as Empowerment Scholarship Accounts in Arizona.

"We just plan to keep education Arizona voters about what a no vote means, which to us is keeping badly needed funds in the public education system instead of in the pockets of private interests and national special interests," said Dawn Penich-Thacker, spokeswoman for, Save Our Schools Arizona.

A spokeswoman for the American Federal for Children referred calls to Tim La Sota, the lawyer who brought the challenge.

"We are going to appeal and we are confident that the court of appeals will overturn this ruling because the children who need ESAs and have had this opportunity stolen from them, deserve to have their day in court," La Sota said in a statement. "The facts and evidence prove that Save Our Schools did not successfully make the ballot and many of the things they did were in serious violation of the law."

Arizona first passed a voucher program for disabled students in 2011. It now covers a third of all students, including children attending failing schools, those living on Indian reservations, foster children and children of military members. Despite those changes, only about 3,500 students now use it to pay for private school tuition, and more than half are disabled.

Voucher backers say they give all parents the opportunity to choose the school they feel is best for their children. They have funding from wealthy Ducey backers, including billionaires Charles and David Koch. They're expected to flood the airwaves drumming up support for vouchers in advance of November's election.

Opponents say they will keep fighting door to door.

"We will do this the same way we gathered the signatures — on the ground, regular Arizona parents and retires, talking to our neighbors," Penich-Thacker said. "Arizonans ... realize that the public school in their neighborhood is what works for their lifestyles and that we can't afford two separate education systems, one for the haves and one for the have-nots.

Proposition 305: Referendum on Arizona Voucher Expansion Law Voucher Vote Creates Dilemma for School-Choice Supporters Appeals Court Won't Block Arizona Law Targeting Initiatives
By posting comments, you agree to our
AZPM encourages comments, but comments that contain profanity, unrelated information, threats, libel, defamatory statements, obscenities, pornography or that violate the law are not allowed. Comments that promote commercial products or services are not allowed. Comments in violation of this policy will be removed. Continued posting of comments that violate this policy will result in the commenter being banned from the site.