Massive tribute outside hospital is boxed up, sent to storage by Mark Duggan Tweet 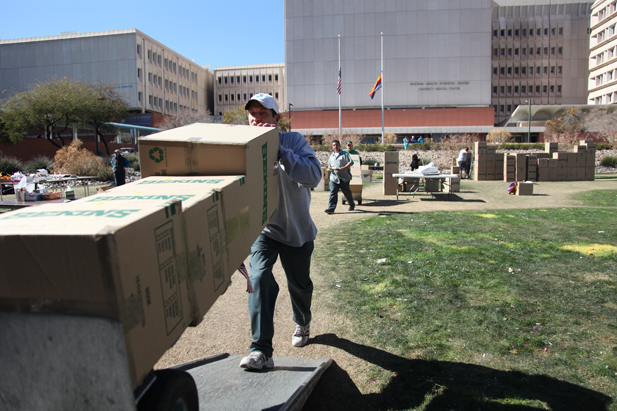 Workers load up boxes containing mementos from the shooting memorial at UMC.

Volunteers met early in the morning to begin the task of dismantling the tribute outside University Medical Center, the hospital where Congresswoman Gabrielle Giffords and others were treated after the Jan. 8 mass shooting.

Volunteers boxed up thousands of flowers, cards, candles and other offerings. Movers then loaded the roughly 60 boxes into two large trucks. The mementos were taken to a hospital storage facility for safekeeping.

Stephen Brigham, UMC’s director of capital planning and projects, told reporter Devlin Hauser that the hospital is working with University of Arizona archivists to categorize and store the offerings. 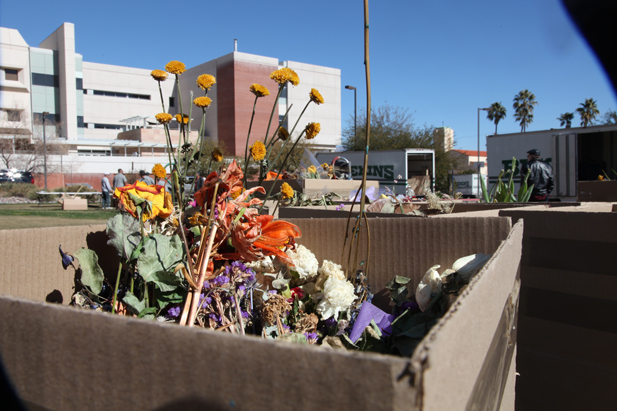 Flowers and other mementos were gathered by volunteers to be categorized and stored. 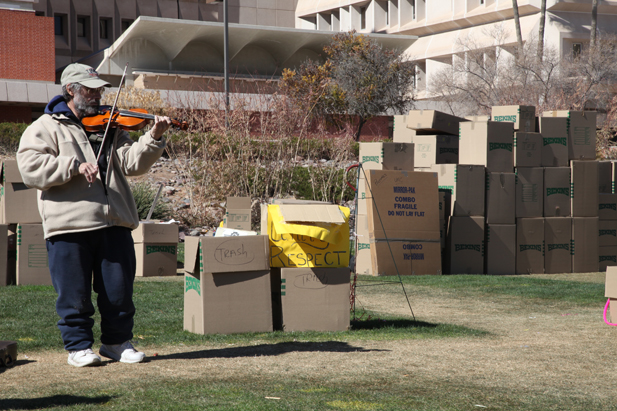 Violinist Michael Sigler plays on the UMC lawn as the memorial is packed up.

Listen to the complete interview with Stephen Brigham, UMC’s director of capital planning and projects. He talks more with Devlin Houser about coordinating the archiving of memorials at UMC, and the Safeway where the shootings occurred:

Hospital Drill Simulates Aftermath of Mass Shooting “Gabby Giffords: Won’t Back Down” is a journey of healing from gun violence. Artist Michael Moore and the natural world in charcoal.
By posting comments, you agree to our
AZPM encourages comments, but comments that contain profanity, unrelated information, threats, libel, defamatory statements, obscenities, pornography or that violate the law are not allowed. Comments that promote commercial products or services are not allowed. Comments in violation of this policy will be removed. Continued posting of comments that violate this policy will result in the commenter being banned from the site.