Key parts of the historic document that purchased much of the West from Mexico are on display in Tucson during February by Luis Carrión Tweet
The Treaty of Guadalupe Hidalgo is on display this month at the Arizona State Museum. Although the treaty is more than 170 years old, it's considered a living document because it continues to shape people's lives in very concrete ways, particularly their relationship to natural resources such as water and grazing.
AZPM

The Treaty of Guadalupe Hidalgo defined the U.S. Southwest and, in large part, the international border with Mexico.

When the Treaty was signed on Feb. 2, 1848, Mexico lost about half of its territory to the United States, including present-day California, Arizona, Nevada, Utah, New Mexico, and parts of Colorado, Texas and Wyoming. In exchange for the vast expanse of land, Mexico received $15 million.

Michael Brescia is associate curator of ethnohistory at the Arizona State Museum, and a professor in the history department of the University of Arizona. He says the Treaty of Guadalupe Hidalgo, named for the city in which it was signed, represents an important part of history in the Americas. 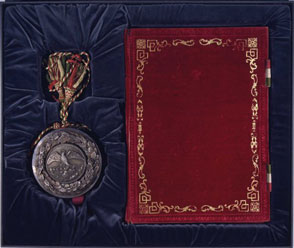 Cover and accompanying seal for Treaty of Guadalupe Hidalgo

Brescia says the document “is a peace treaty that ended hostilities between the United States and Mexico, which means it was a product of war, making it difficult and unsettling to discuss when we are so used to celebrating historical documents and the milieu that created them.”

Brescia points out the U.S./Mexico War stemmed from disputes over Texas, and it was the ensuing clashes between Mexican troops and U.S. forces that provided the rationale for a Congressional declaration of war on May 13, 1846. The president at the time was James Knox Polk.

“Because blood had been shed in that disputed territory,” Brescia says, “President Polk felt he had enough justification to invade Mexico.”

Brescia says the “treaty is a stark reminder that the United States achieved its so-called Manifest Destiny at Mexico’s expense.”

The treaty tells many stories, he points out, “and it’s fair to say that Mexico and Mexicans don’t find much to celebrate in this 1848 document. [Mexicans] are not having parades and setting off fireworks to commemorate the Treaty of Guadalupe Hidalgo.”

Last page with signatures and seals

The five key articles of the Treaty of Guadalupe Hidalgo are now on display at the Arizona State Museum through the month of February. The complete treaty is housed in the National Archives in Washington, D.C.

Saturday, February 12, 2011: Public Symposium & Teacher Workshop Join Arizona State Museum for a discussion of the treaty's significance and continuing impact followed by information for teachers on engaging students with the treaty.

More About the Symposium & Teacher Workshop

"Chasing the Ghost Bear: On the Trail of America’s Lost Super Beast" with author Mike Stark. Arizona Spotlight for August 11th, 2022 Artist Michael Moore and the natural world in charcoal.
By posting comments, you agree to our
AZPM encourages comments, but comments that contain profanity, unrelated information, threats, libel, defamatory statements, obscenities, pornography or that violate the law are not allowed. Comments that promote commercial products or services are not allowed. Comments in violation of this policy will be removed. Continued posting of comments that violate this policy will result in the commenter being banned from the site.