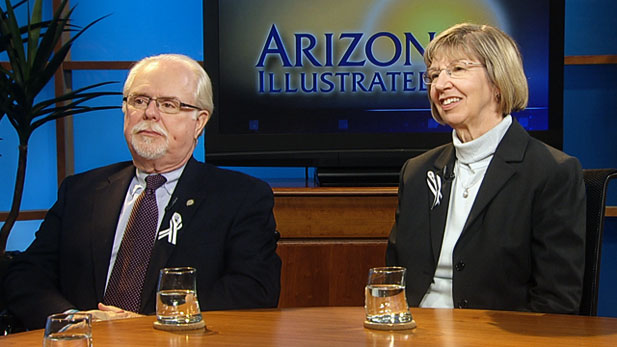 A month after the tragic Jan. 8 attempted assassination of U.S. Rep. Gabrielle Giffords, two survivors of the shooting reflect on their recoveries.

Ron Barber, the Congresswoman's district director, and Pam Simon, her outreach coordinator, were wounded in the shooting. With their physical and emotional recoveries underway, both are eager to return to work for her constituents. The office, which re-opened just two days after the shooting, has been humming "as usual."

"We work hard," says Barber. "The Congresswoman inspires that in all of us."

Two of the survivors of the January 8th shooting join Christopher Conover in the studio.

US to fill border wall gaps at open area near Yuma Pima County increases preschool and childcare assistance The Buzz heads back to school
By posting comments, you agree to our
AZPM encourages comments, but comments that contain profanity, unrelated information, threats, libel, defamatory statements, obscenities, pornography or that violate the law are not allowed. Comments that promote commercial products or services are not allowed. Comments in violation of this policy will be removed. Continued posting of comments that violate this policy will result in the commenter being banned from the site.