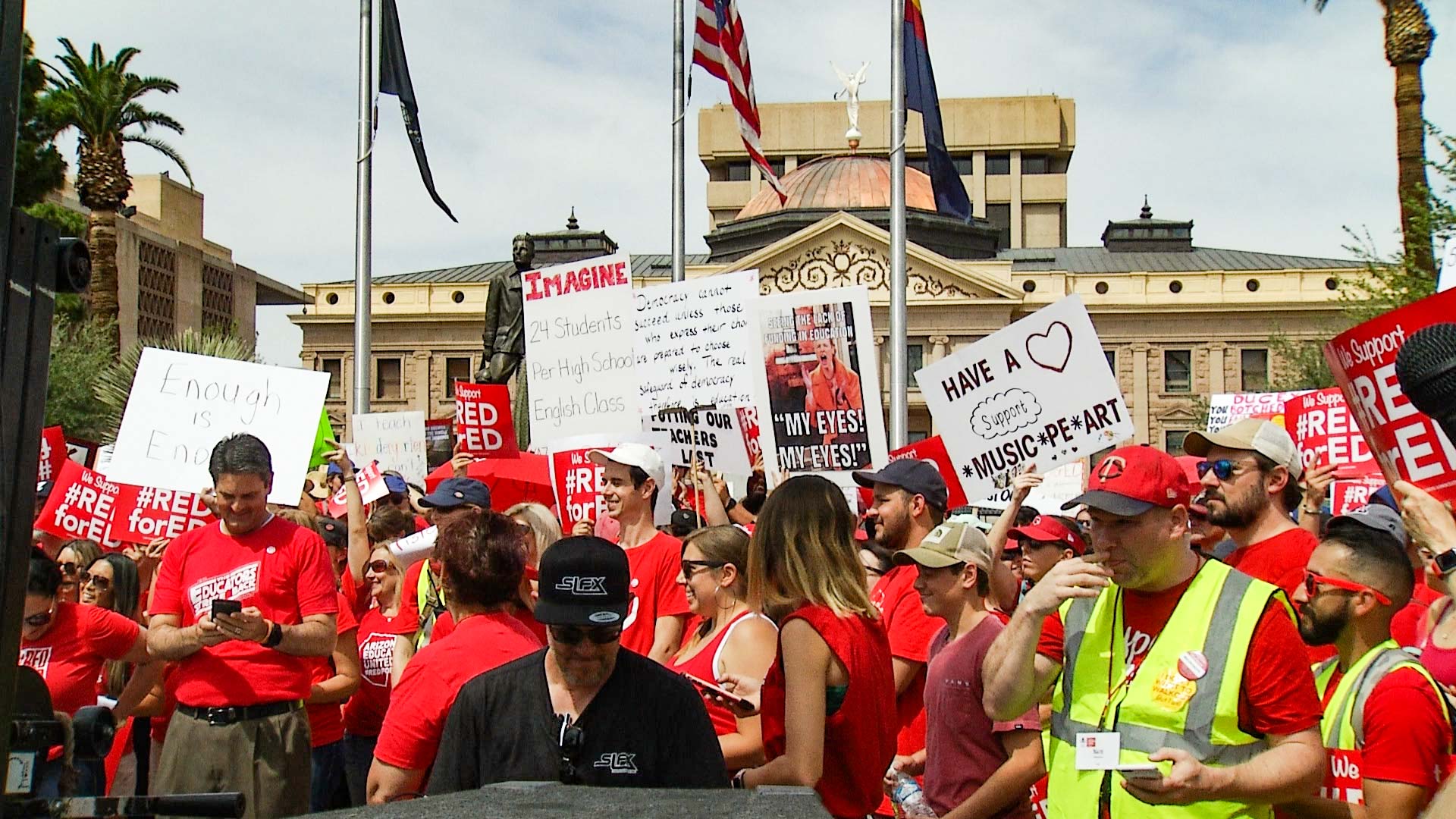 PHOENIX — As they packed up their protest signs and returned to the classroom to finish out the school year, thousands of teachers in North Carolina turned their attention to a different fight: the midterm elections.

Their counterparts in Arizona, Oklahoma and West Virginia are already waging a similar battle following protests over teacher pay that shut down schools statewide in recent months, transforming education funding into a major midterm campaign issue in many states.

Leaders of the Arizona movement are gathering signatures for a ballot initiative to tax the wealthy and use the extra money to pay for education. They are vowing to oust lawmakers and other state officials whom they deem anti-education. Teachers in Oklahoma and Kentucky are running for office in larger numbers, in some cases directly challenging incumbents who slashed education spending.

A march through downtown Raleigh, North Carolina, on Wednesday drew thousands of teachers and shuttered schools for about two-thirds of the state's students. Hundreds of people outside the House and Senate galleries held signs and chanted: "Remember, remember, we vote in November." City blocks turned red, the color of shirts worn by marchers shouting "We care! We vote!"

Teachers believe the momentum from the walkouts will propel them into the elections and force politicians to take education seriously.

"We turn to the ballot and we get it done that way," said Noah Karvelis, an organizer of the group Arizona Educators United that mobilized the teacher walkout. "We got the power, we just execute now."

In Oklahoma, the candidate filing period coincided with the second week of a teacher walkout that drew thousands of disgruntled educators and their supporters to the Capitol. The result was dozens of teachers and administrators who filed for state House and Senate seats, many making their first-ever run for office. Popular targets were Republican incumbents who opposed a package of tax increases used to pay for teacher raises.

In Kentucky, at least 39 current and former teachers are running for seats in the state legislature in its upcoming primary. The most high-profile race involves a high school math teacher who is running against Republican Jonathan Shell, state House majority floor leader. Shell helped write a bill making changes to the teachers' troubled pension plan that prompted an angry response from teachers.

Amanda Jeffers, a Democrat and a high school English teacher in Oklahoma City, said she had no plans to run for office until the statewide teacher walkout, where she grew frustrated with the frosty reception she got from legislators.

"I always thought teachers were a respected community in the state. We were not treated with much respect," Jeffers said. "The condescension is definitely what sent me over the edge."

The teacher movement is already having electoral consequences in the place where it started, West Virginia. On the state's primary night last week, voters nominated Democratic state Sen. Richard Ojeda to run for an open congressional seat. Ojeda is a retired Army major who became popular with the state's teachers for supporting their efforts.

Jessica Sanabria, a second-year teacher at Alderman Elementary School in Wilmington who attended Wednesday's rally in North Carolina, isn't yet registered to vote but will be soon. She said recent teacher strikes in other states and what's happening in North Carolina has caused her to be more interested in what candidates stand for.

Mark Jewell, president of the lobbying group North Carolina Association of Educators, which organized the march, called Wednesday just the beginning of a six-month long effort to replace legislators it blames for failing to raise teacher salaries and provide adequate school funding.

Arizona teachers, too, are pledging to stay politically involved following a six-day walkout that jammed the Capitol with raucous rallies and secured a 20 percent pay raise over three years from a Republican-controlled statehouse and GOP Gov. Doug Ducey. Many teachers toted signs with the message "Remember in November" during the walkout, and the grassroots group is focusing its immediate efforts on the ballot initiative to increase income taxes on wealthy earners.

More than 150,000 valid signatures are required to get the initiative on the ballot, and teachers have been training on how to circulate the petitions. On Wednesday, organizers pledged to gather 25,000 signatures in support of the tax proposal in solidarity with North Carolina.

The movement in Arizona is known as #RedforEd because the teachers donned red shirts when they began to organize — and its messaging bears a striking resemblance to a political campaign. #RedforEd yard signs, messages of support scrawled on cars' back windows and bumper stickers remain visible around Arizona communities, more than three months before the state's August primary.

It's still too early to tell what kind of effect the movement will have on 2018 races in Arizona, with a hotly contested U.S. Senate seat and Ducey running for a second term. And the momentum of the movement is sure to face political opposition — the Republican Governors Association is already running pro-Ducey television ads describing him as a champion of teachers, and Arizona has previously been a hotbed of political spending for pro-school choice interests like the billionaire Koch brothers.

Former Arizona Gov. Jan Brewer, a Republican, called the teachers movement a force to be reckoned with.

"A sleeping giant was awoke. They're awake and alive and they're out there and they want change," she said.

Brewer also said that while the pay increase was well-deserved, teachers are overplaying their hand with the proposed tax increase on the wealthy.

"If the teachers put that initiative on the ballot I think that could almost kill them," Brewer said. "That's just a page out of Bernie Sanders' playbook, that is so socialist that I don't think people would tolerate it."

Tiny Homes Used to Recruit and Retain Vail Teachers Why 9% Raises for Arizona's Teachers Are No Guarantee Striking Arizona Teachers End Walkout After Education Bill Signed
By posting comments, you agree to our
AZPM encourages comments, but comments that contain profanity, unrelated information, threats, libel, defamatory statements, obscenities, pornography or that violate the law are not allowed. Comments that promote commercial products or services are not allowed. Comments in violation of this policy will be removed. Continued posting of comments that violate this policy will result in the commenter being banned from the site.