For one Tucson family, competing in rodeo is a beloved art--and a balancing act by Gisela Telis Tweet 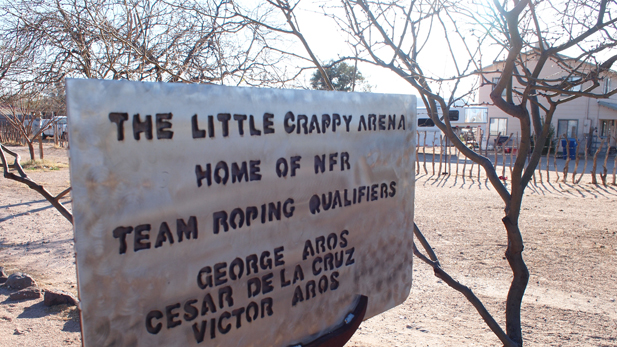 In the afternoon sun, the walls of Victor Aros’ living room are blinding.

Light reflects off rows of framed photos and prize buckles that chronicle a family legacy of rodeo wins. The gleaming, defiant sign in the front yard sums up the story: against the odds, the “little crappy arena” on this 2.5-acre plot off South Nogales Highway has produced three qualifiers for the National Finals Rodeo, the country’s premiere professional rodeo event.

It was the potential for an arena—however small and rough-hewn—that prompted Victor and his wife Yolanda to buy the property over forty years ago.

At the time, only two houses and a church dotted this stretch of yellow land, says Zenaida Aros Olivar, Victor’s daughter, who lives in a separate home on the same property.

But the city has encroached over the years, and now houses, parking lots and other development flank the Aros homestead on all sides. It sits within walking distance of Tucson International Airport and a Desert Diamond Casino, a leftover country outpost amid the urban sprawl.

“I tell my parents that we can go, we can move somewhere else,” Zenaida says, rolling her striking gray-green eyes, “but they don’t want to leave here.”

And that’s not so surprising, because “here” holds a lot of history. In his own youth, Victor—who recalls riding in the Tucson Rodeo Parade in 1938 alongside his fellow “Little Cowpunchers”—competed in the rodeo, following in the footsteps of his professional rodeo-riding father.

His backyard arena became the sacred place where he passed down that knowledge, teaching his children to rope and ride. 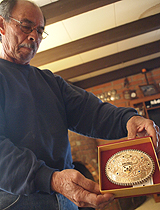 “I was doing it myself, and then they cheated and started doing it too,” quips Victor, who is 84 and still rides and ropes daily.

Evenings were spent practicing, and weekends were devoted to the rodeo circuit, where the working-class Aroses slept in the bed of their pickup truck—and routinely outperformed their more well-off competitors.

Zenaida ranked among Arizona’s top five in roping and barrel-racing through her teenage years, while her brothers, George and Victor, went on to the professional rodeo circuit. And when Zenaida had children of her own, the legacy continued, despite her best intentions.

“They had a choice,” she says. “We put them into baseball and other sports, but it just didn’t take.”

So Zenaida, a nurse at the Veterans' Affairs hospital, and second husband Larry Olivar did as her parents had. They spent evenings practicing alongside her children; they kept a calendar to track entry fee due dates and rodeo events, and helped her children pack their animals and equipment so they could hit the road right after work on Friday evenings.

"We did a lot," says Zenaida, "but the kids always made enough to enter the next competition."

“My grandfather’s my hero,” says de la Cruz, “so I always wanted to be a cowboy.”

De la Cruz took to team roping, an event in which one rider on horseback (the header) ropes a steer’s head around the horns while another rider (the heeler) lassos the legs.

He taped posters of his favorite heelers to his bedroom walls and kept his ropes in careful coils under his bed. When a roping accident at age 12 cut the thumb off his right hand, de la Cruz waited only two weeks before resuming his practice.

“Cesar was incredibly passionate” about the rodeo, says Zenaida, “and very, very hard on himself.” 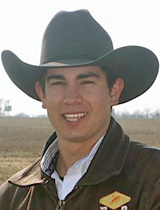 De la Cruz’s perfectionism has paid off: now 27 years old, he’s ranked among the world’s top 30 ropers and has matched the world record time for the event (3.5 seconds) with partner and friend Colter Todd.

But he's also a new husband and father, and combining his many loves into a life that works isn't easy. The balancing act proved too much for Todd, who retired in 2008, at age 24, to spend more time with his family.

"I respect his decision," says de la Cruz. "You wouldn't have a heart if you didn't understand that."

The spread and frequency of rodeo events takes competitors on the road for weeks on end. In the first week of March alone, de la Cruz roped in 10 events across three states, logging nearly 2,000 miles in five days. With a new family depending on his rodeo earnings, "it's very imperative that I win," de la Cruz says.

What helps him, he adds, is having a rather unusual wife. Arena Robertson, now Arena de la Cruz, is a champion roper in her own right.

Arena grew up in a rodeo family herself, watching her parents compete on the circuit and later joining them, along with her siblings. The family lived in Montana but wintered in Arizona, and she and de la Cruz crossed paths on the rodeo circuit here.

After seeing her rope, de la Cruz bet his friends that he and Arena could beat them as a roping team.

"We won, and I knew right away that this was an awesome girl," he says. "I just grew up loving her, because she was so awesome."

The two married three years ago—only days before Arena won the national intercollegiate rodeo all-around title—and have been on the road together since. Arena refused to let the birth of son Camilo, now nine months old, slow her down.

Just two weeks after his birth, the couple packed their equipment, horses and clothing—including multiple sizes for Camilo to wear as he grew—into their trailer and lived on the circuit for six months.

De la Cruz says their support on the sidelines during the endless rodeo runs inspires him to win. The times when they can’t come along, he admits, are the hardest. De la Cruz is saving up for a larger trailer that will make it easier to bring along his family as he travels.

“I want them with me as much as possible,” he says. “Kids change day to day, and you can miss so much. I never thought having a kid would change my life as much as it has.”

The changes that family can bring are new to de la Cruz, but not to Zenaida, Larry, Yolanda or Victor. They’ve been in the rodeo business—and the parenting business—a while, and they know what’s in store for de la Cruz, what sacrifices he'll be willing to make. It makes Victor philosophical.

“We didn’t have money, but we had a hell of a good time,” he says. “Now Cesar has his little boy, and his friends are having kids—it’s a chain, and it keeps going.”

TUSD school year to start with staff shortages and security upgrades Convictions won’t be tossed in deadly 1970 Tucson hotel fire Arizona and Duke agree to basketball series for 2023 and 2024
By posting comments, you agree to our
AZPM encourages comments, but comments that contain profanity, unrelated information, threats, libel, defamatory statements, obscenities, pornography or that violate the law are not allowed. Comments that promote commercial products or services are not allowed. Comments in violation of this policy will be removed. Continued posting of comments that violate this policy will result in the commenter being banned from the site.