The senior senator from Arizona died a year after a brain cancer diagnosis. He lived a life filled with family and decades of service, from the Navy to a career in politics. by Christopher Conover Tweet 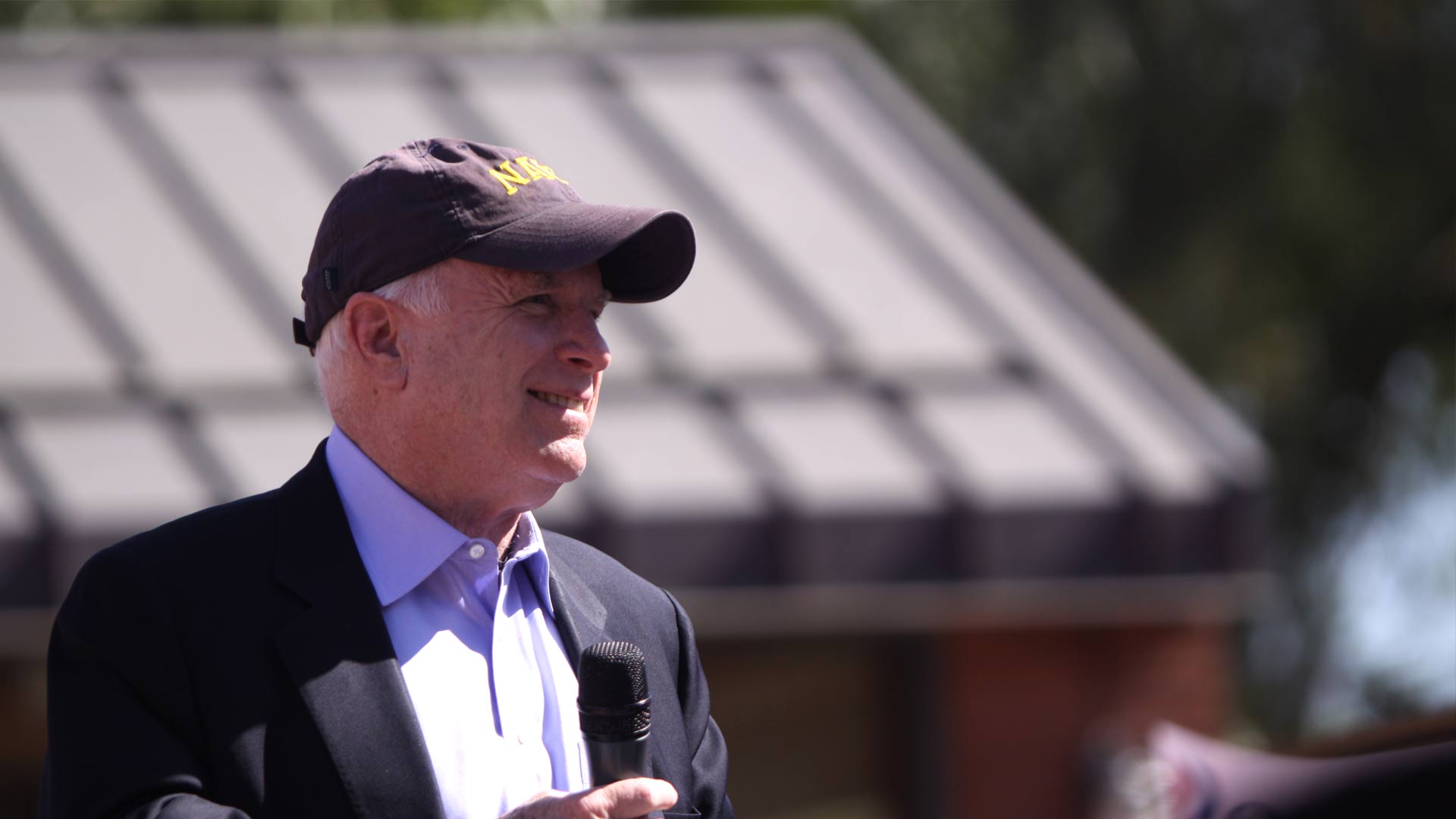 Sen. John McCain died today at the age of 81. He was diagnosed with glioblastoma, an aggressive form of brain cancer, in the summer of 2017.

On Aug. 24th, his family announced he was discontinuing medical treatment. In a statement, they said: "In the year since, John has surpassed expectations for his survival. But the progress of disease and the inexorable advance of age render their verdict."

John Sidney McCain III was born Aug. 29, 1936. He shares his name with his naval admiral father and grandfather. 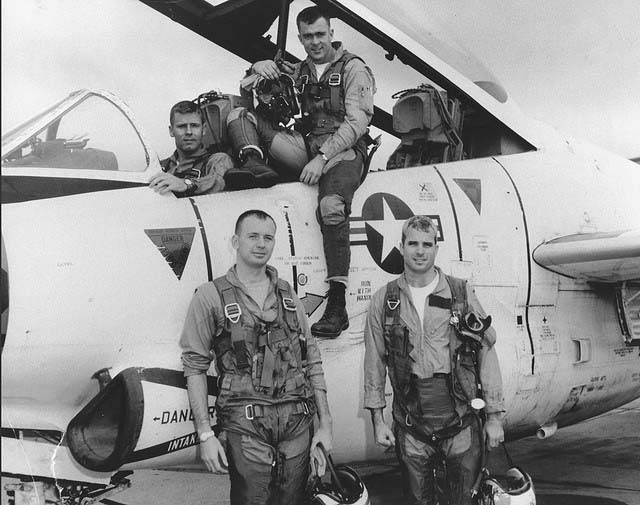 VIEW LARGER John McCain and his Navy squadron.
Via Library of Congress

McCain followed his father and grandfather to the U.S. Naval Academy. In 2003, he told the Library of Congress Oral History Project on the Vietnam War that the Navy was not the life he wanted as a young man.

"I resisted it from time to time, but I was pretty sure that was what was going to happen," he recalled.

On Oct. 31, 2017, he returned to the Naval Academy and spoke to the Brigade of Midshipmen. He jokingly told them the Navy was probably as glad to see him graduate as he was to leave Annapolis. McCain also said in that speech that the one thing he learned at the academy that carried him through life was honor.

“The courage I think John McCain showed as a POW he shows every day in congress, he is a man who will speak truth to power. He did to the North Vietnamese, and he does it here. Day in. Day out.”
- Sen. Chuck Schumer, October 2017 Courtesy Cronkite News Service

"You'll know that to serve this country is to serve its ideals. The ideals that considers every child on Earth as made in the image of God and endowed with dignity and the rights to life, liberty, and the pursuit of happiness. It is a noble cause, it is your cause and it is worth living and dying for," he said.

After McCain's graduation from the Naval Academy he became a pilot and went to Vietnam. In October 1967, he was shot down while taking part in a 20-plane bombing mission of a thermal power plant in the North Vietnamese capital, Hanoi.

During the ejection, he was seriously injured. He landed in a lake. 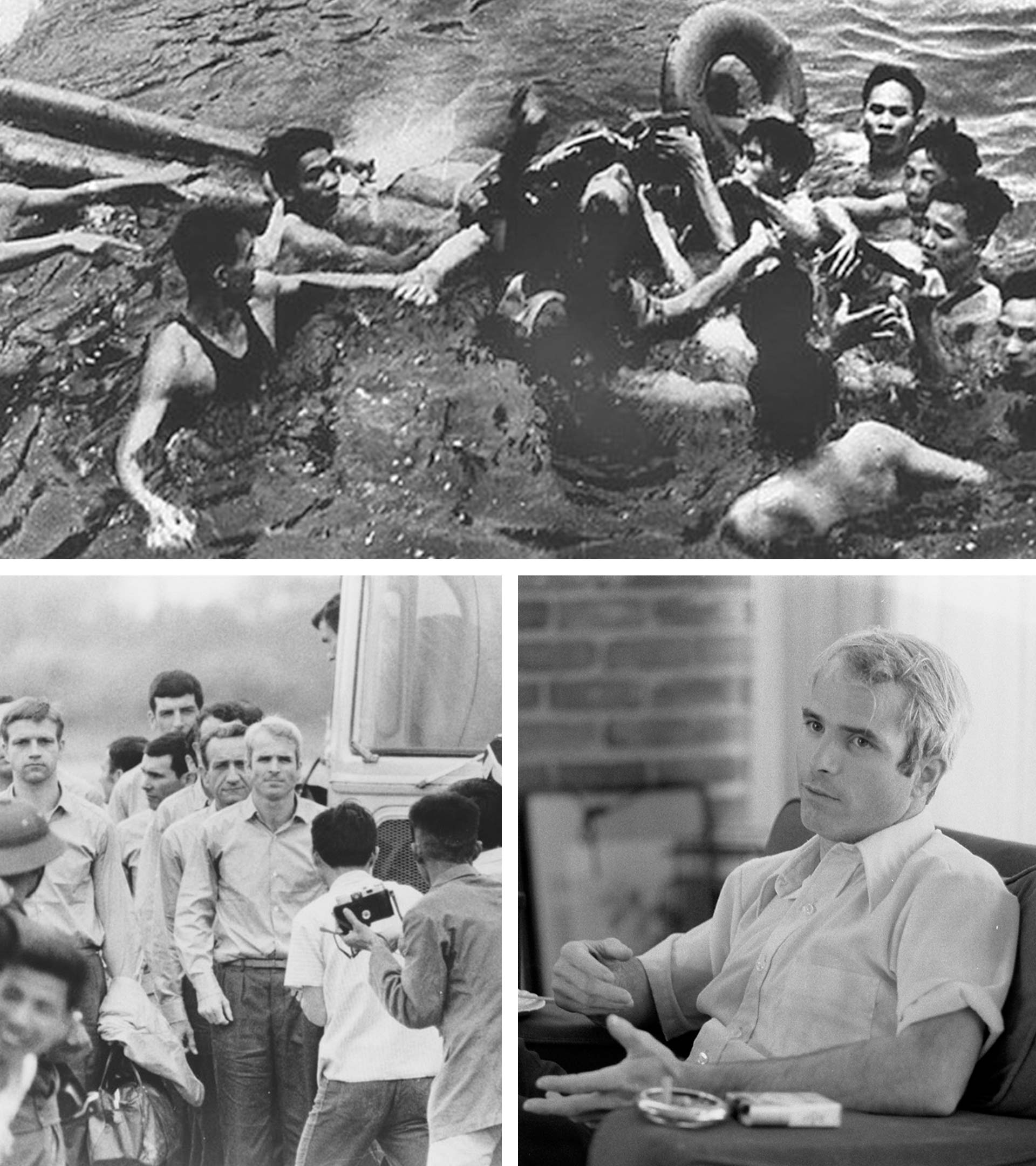 Counterclockwise from top, McCain is pulled from the water by Vietnamese civilians near Hanoi Vietnam, October 26, 1967; the day of his release, March 14, 1973; McCain following his release, April 1973. All adapted from National Archives and Records Administration except bottom right, Thomas J. O'Halloran, via Library of Congress.

"I had some difficulty getting my life vest to inflate — had to use my teeth to pull the toggle on it after struggling around. When I floated to the surface, some Vietnamese came out and pulled me in to shore. The crowd was rather angry, which is understandable, and they hit me and broke my shoulder with a rifle butt and bayoneted me a couple of times," he told the Library of Congress.

McCain was taken to the infamous prison known as the "Hanoi Hilton." In 1968, the North Vietnamese offered to release McCain early because his father was an admiral. McCain turned the opportunity down.

"You'll know that to serve this country is to serve its ideals. The ideals that considers every child on Earth as made in the image of God and endowed with dignity and the rights to life, liberty, and the pursuit of happiness. It is a noble cause, it is your cause and it is worth living and dying for"

"It wasn't an easy decision because I was in very poor physical health, but I also knew the code of conduct said that sick and injured go first, and then by order of capture. Edward Alvarez had been there three years before I ever got there," said McCain.

McCain was released in 1973, after five and a half years as a prisoner of war. Then-Secretary of State Henry Kissinger was in Hanoi the day McCain was released. Kissinger remembered that day as he began testimony in front of the Senate Armed Services Committee in January 2018.

"I had been in Hanoi that day, and they offered to let me take him on my plane back to the United States, and I refused on the grounds that nobody should get special treatment. And when I met him here at the White House, he came up to me and said, 'Thank you for saving my honor,'" Kissinger said. 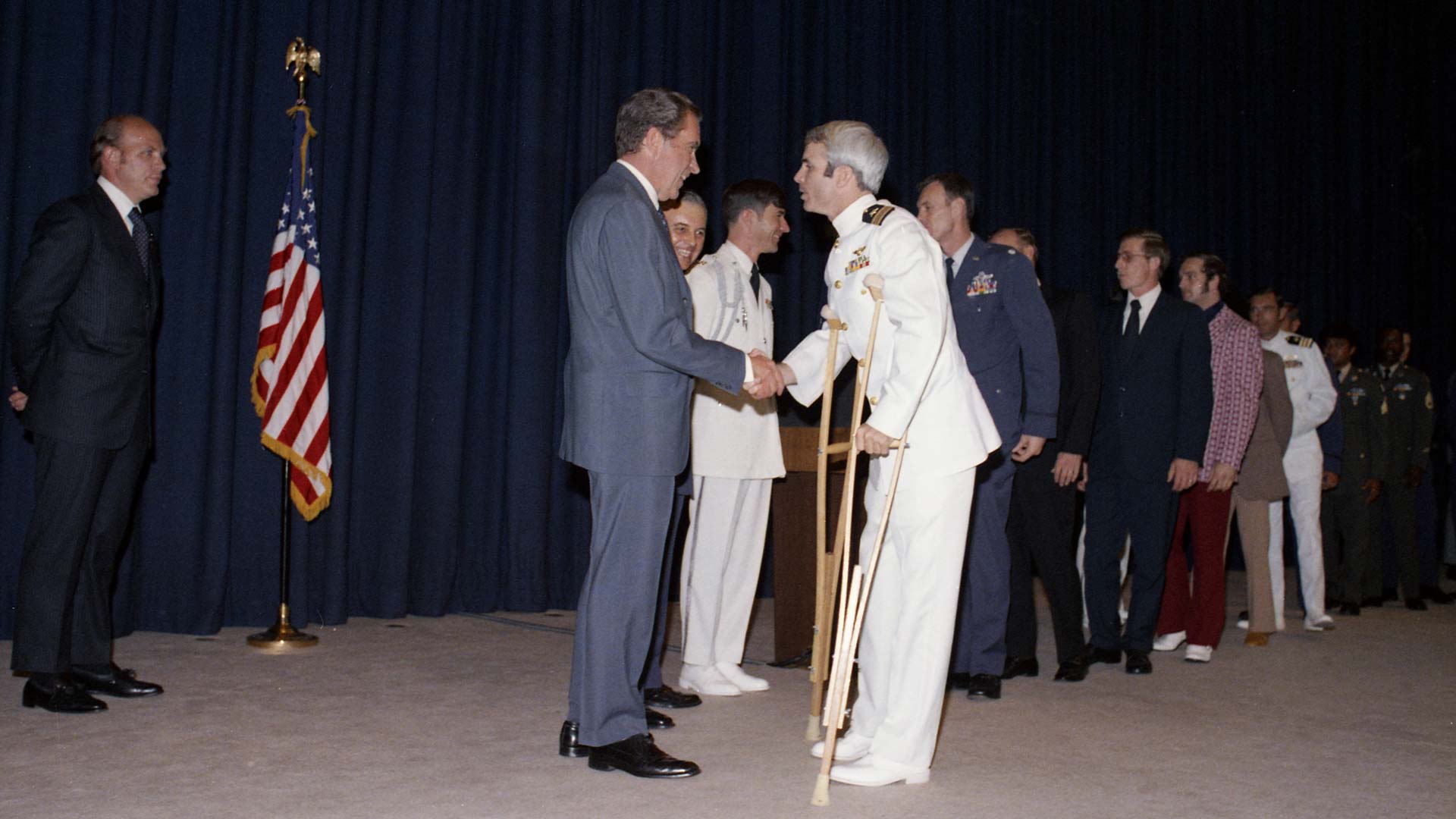 Former POW John McCain meets President Richard Nixon, May 24, 1973.
National Archives and Records Administration
“Sen. McCain has preserved the honor of our country as a great warrior but also as someone who, wherever where the weak were threatened and the just were persecuted, he made it clear that America was on their side. And that he was not simply a warrior, but a defender of our values all over the world”
- Former Secretary of State Henry Kissinger testifying in front of Senate Armed Services Committee, January 2018

McCain stayed in the Navy following his release. He regained his flight status, but his last job in the service, naval liaison officer to the Senate, set him on another path.

"I got interested in the political process because I observed it here, saw how impactful a hardworking, dedicated, knowledgeable, member of the Senate can be. So I aspired to be one," he said in 2003.

When McCain retired from the Navy, he moved to Arizona with his second wife, Cindy.

In Phoenix he worked for his father in law's company, Hensley Distributing, but soon decided to run for office.

In 1983, McCain was sworn in as Arizona's representative from the 1st Congressional District. 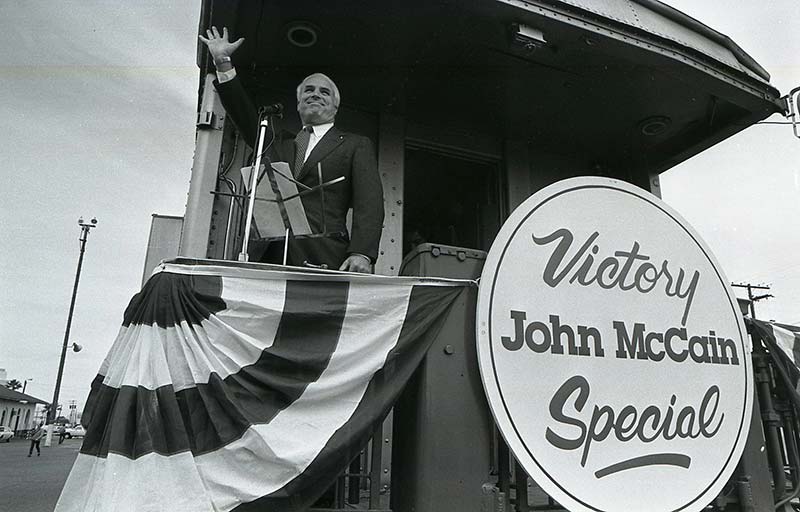 Senate candidate John McCain speaking on the back of a train to kick off his campaign, Feb. 1, 1986.
Elizabeth Mangelsdorf, Arizona Daily Star

In 1989, he got caught up in the Keating Five scandal. McCain; Alan Cranston, D-Calif.; Dennis DeConcini, D-Ariz.; John Glenn, D-Ohio; and Donald Reigle, D-Michigan, were accused of intervening in the investigation of Lincoln Savings and Loan Association, which was chaired by Charles Keating, Jr. 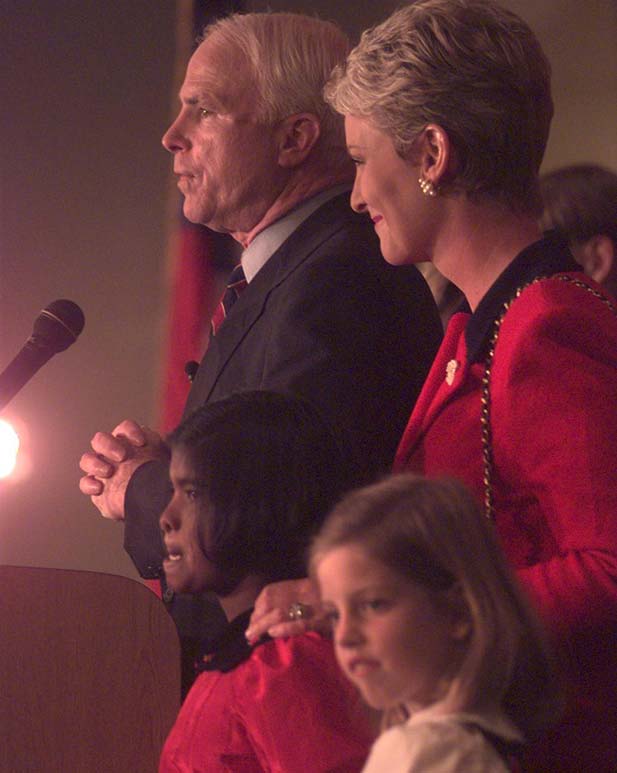 An investigation by the Senate Ethics Committee cleared McCain and Glenn of wrongdoing. The committee did say he showed poor judgement in meeting with federal investigators on behalf of Keating.

Sen. McCain ran for president in 2000 and 2008. His second run earned him the party nomination, but he lost to Barack Obama.

That loss became a common joke in McCain speeches. 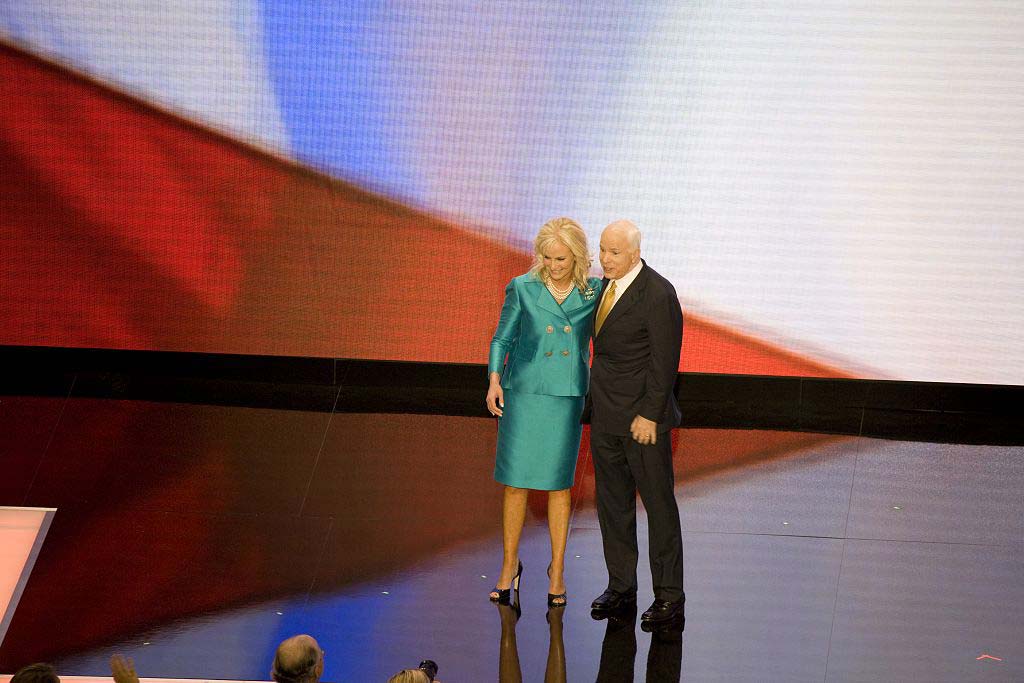 During that race, he was given the national moniker "Maverick." Those who knew him say it was always a character trait.

In April 2004, he appeared on AZPM's Arizona Illustrated program. During that interview, McCain spoke about standing up for one's beliefs.

"Moral courage is like a muscle: The more you use it, the stronger it gets. The first time you stand up to a class bully, it's hard. The second time, it's not so hard," said McCain.

In 2017 after the announcement of his brain cancer diagnosis, McCain stood up and cast the deciding vote to keep the Affordable Care Act, better known as Obamacare.

“John McCain's legacy is enormous. We are a state that has been blessed with incredibly important leaders going already back to Carl Hayden of course and John Rhodes, and Mo Udall, and Dennis Deconcini and the others that have served in this state. But certainly no one will be greater than John McCain's legacy and it has been very important for this state.”
- Former U.S. Rep. Jim Kolbe, AZPM, January 2018

That infamous thumbs down vote earned him the ire of President Donald Trump, who mocked him for it. That mocking continued as late as a Trump speech to the Conservative Political Action Conference (CPAC) in February 2018.

He also became an influence in foreign affairs as the chair of the Senate Foreign Services Committee.

In February 2018, McCain's wife Cindy traveled to Germany to accept an award on his behalf from the Munich Security Conference. The award is given for service to international peace and conflict resolution. Former Vice President Joe Biden was also at the award ceremony. 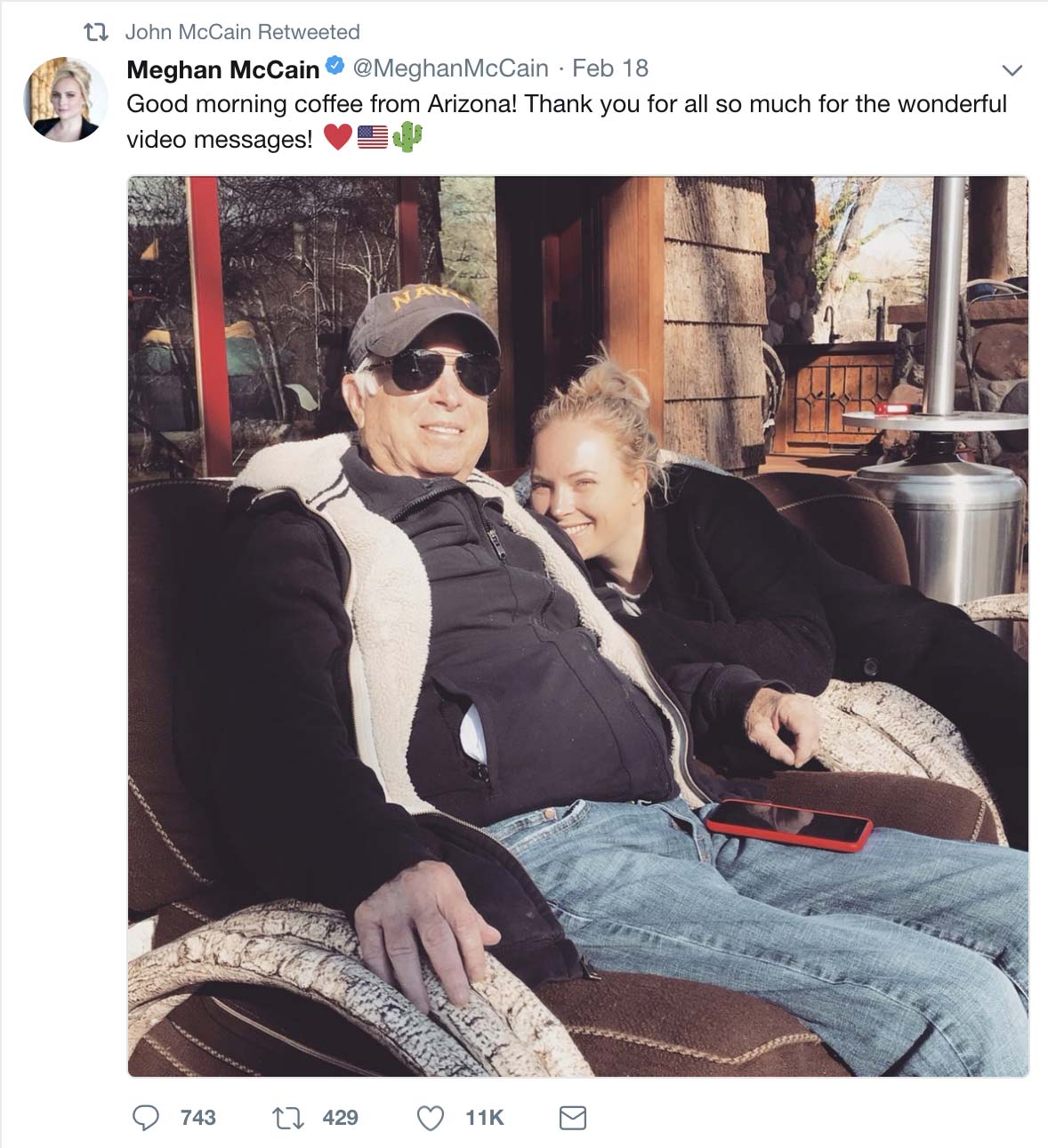 In June 2017, McCain spoke on the Senate floor about his cancer diagnosis. At the time, he also reflected on his years at the Capitol.

"Make no mistake, my service here is the most important job I've had in my life. And I am so grateful, so grateful to the people of Arizona for the privilege, for the honor of serving here and the opportunities it gives me to play a small role in the history of the country that I love."

Former Attorney General Grant Woods dead at 67 Sen. John McCain's Farewell Statement Former Sen. Jon Kyl Remembers Sen. John McCain
By posting comments, you agree to our
AZPM encourages comments, but comments that contain profanity, unrelated information, threats, libel, defamatory statements, obscenities, pornography or that violate the law are not allowed. Comments that promote commercial products or services are not allowed. Comments in violation of this policy will be removed. Continued posting of comments that violate this policy will result in the commenter being banned from the site.